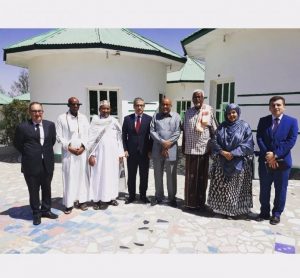 HARGEISA–Somaliland Waddani Party officials met with Mr. Oglan Baker, the new Turkish envoy tasked with the facilitation of resuming the stalled talks between Somaliland and Somalia pertaining to the future relationship between the two countries.

The chairman of Waddani, Abdirahman Mohamed Abdillahi alas “Irro” and other brass party  held a long and fruitful discussion with the Turkish envoy, Mr. Baker, regarding the future plans for Somaliland and Somalia talks, as well as, other local issues such as the forthcoming parliamentary elections, the meager of Turkish grants to Somaliland and the continued bilateral relationship between the two countries. The Turkish envoy is due to meet with members of the UCID, Non-governmental bodies and other civil society organizations.