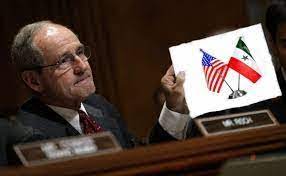 Senior adviser to Somaliland Presidency has said Thursday that the U.S. would officially recognize Somaliland as an independent nation or wouldl continue to diplomatically engage SL and deal with it as a de facto in December that has nothing to do with Somalia.

The U.S government would immediately take necessary steps to do the right and obvious thing which is to offer the Republic of Somaliland America’s diplomatic recognition as a free and sovereign country.

“America’s diplomatic recognition of the 3.5 million freedom-loving Somaliland people, and its legally, democratically elected government can no longer be ignored.”

The move comes after MP Scott Perry has submitted a motion to recognize SL as an independent state to the US Congress.

Congressman Scott Perry drafted the motion Mrach 18, 2022, according to the official website of the US Congress.

This coincides when a high-powered delegation headed up by SL President H.E Musa Bihi Abdi is in the U.S and held key meetings with government officials and members of both houses of US House of Representative, resulted in a motion of Somaliland partnership with US, which was drafted by Senate Members.

The President met with with members of the House Foreign Affairs Committee.

The President of Somaliland and his delegation held a private meeting with MP Chris Smith, a member of the United States House of Representatives and a senior member of the Republican Party’s subcommittee on Africa. Two sides discussed the mutually beneficial interests of the two countries in terms of security, development, economy and many other areas were agreed upon.

The President’s delegation also met with members of the Senate Foreign Relations Committee members Mike Rounds and Chris Van Hollen, for ‘Subcommittee on Africa, and the two sides welcomed the close relationship the United States share with Somaliland.

Finally, members of the US Senate have drafted a motion on Somaliland-US cooperation. “Somaliland Partnership Act, be it enacted by the Senate and House of Representatives of the United States of America in Congress assembled

U.S. Senators Jim Risch (R-Idaho), ranking member of the Senate Foreign Relations Committee, Chris Van Hollen (D-Md.) and Mike Rounds (R-S.D.), chairman and ranking member of the Subcommittee on Africa and Global Health Policy, today introduced the Somaliland Partnership Act to require the Department of State to report to Congress on engagement with Somaliland, and to conduct a feasibility study, in consultation with the Secretary of Defense, regarding the establishment of a partnership between the United States and Somaliland.

The President made speeches at Heritage Foundation whereby he highlighted the importance of security and stability in Somaliland and deepen US engagement with Somaliland.

U.S. Senator James Risch (R-Idaho), ranking member of the Senate Foreign Relations Committee, last month introduced an amendment to the fiscal 2022 (FY2022) National Defense Authorization Act or NDAA to establish a security and defense partnership between the United States and Somaliland which is separate and distinct from any security and defense partnership with the Federal Republic of Somalia.

The amendment suggests that this partnership should include coordination with Somaliland government security organs, including Somaliland’s Ministry of Defense and Armed Forces.