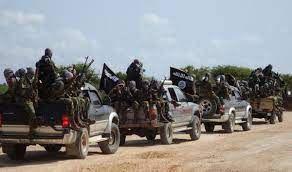 The United States government on Monday put sanctions on 14 men, including six it accused of running a network that engages in weapons procurement, financial facilitation and recruitment for the Al-Qaeda-linked militant group Al-Shabaab.

“Treasury is focused on identifying and disrupting al Shabaab’s illicit networks operating in Eastern Africa,” Brian Nelson, the Treasury’s under secretary for terrorism and financial intelligence, said. “We will continue to take action against the weapons smuggling and fundraising activities of al Shabaab and other (Al-Qaeda) affiliates.”

Abdullahi Jeeri, Khalif Adale, Hassan Afgoye, Abdikarim Hussein Gagaale, Abdi Samad and Abdirahman Nurey are the six men named by the US Treasury, who were designated under Executive Order 13224, which targets terror organizations and their supporters.