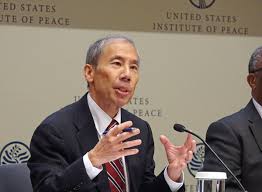 US ambassador to Somalia Mr Donald Yamamoto was asked the possible damage in regard to  reputation that election postponement could impact on Somaliland democracy. The ambassador replied ” America believes that peace and tranquility can only be achieved through good governance and fulfillment of the promise of upholding democracy made by administrations on behalf of community leaders, youth and entire society”.

Ambassador Donald Yamamoto stated in his interview with CBA television that significant debts will be relieved from Somalia which former Somalia governments have lent from the world, which of course Somaliland is included. This loan relinquishment, which Somaliland is part of it, will allow them to lent fresh loans and they will as well attract international investors; However, he underlined that anyone who would grant new loans and do investment with Somalia will firstly consider good governance and functioning system of the country. Elaborating this, ambassador said all international community attentions will be directed to Somaliland and Somalia which means Somalia/Somaliland’s human rights, civil rights, security status, the way they dealt with their people and how they work with women and children will be closely scrutinized.
On the other hand, Mr Yamamoto said he had been involving Somalia issue before he was appointed as USA ambassador to Somalia. During these time. I have visited Somaliland and puntland numerous occasions for work purposes. Regarding Somaliland’s good governance, the ambassador said creating governmental institutions and job opportunities is necessary and that is something required from every country including Somalia.
Furthermore, Ambassador Donald Yamamoto said despite the fact Somaliland declared its independence from Somalia, as yet no country is recognized them as sovereign state and the international community still treating them as part of Somalia. On the account of this, USA is urging Somaliland, Somalia and other regional states to promote intermingling,  trade mingling in particular, which will certainly nurture the economy of Somaliland and Somalia. Taking about economic developments, the ambassador said Somaliland boast vast economic opportunities that could be beneficial to both Somaliland and the region at large if it is accordingly employed namely; non-fuel Energy ( solar energy and wind energy). He also highlighted the remarkable strides that Somaliland has made in terms of seaports, airports and fisheries.
At the end Mr Yamamoto said Somaliland and Somalia are ought to have mutual ties in every aspects in order them to move forward and they’re extremely optimistic about developments that Somaliland and Somalia would make if they economically cooperated together after debts relieved from them. ” honestly Somaliland and Somalia are moving towards right direction and we will help them for that cause and I am foreseeing that in coming five years the situation will be much different than it’s now”.