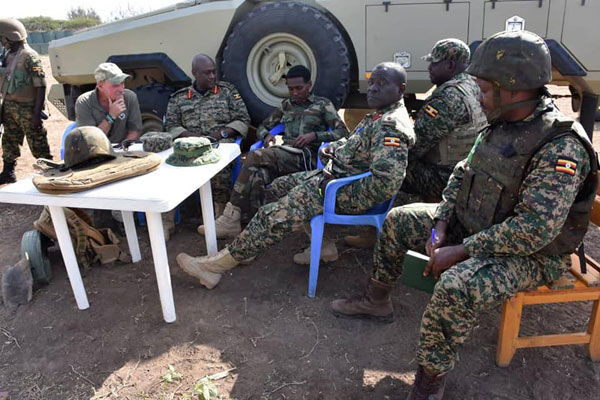 The commander of the Ugandan troops in Somalia Brig Michael Kabango has visited his troops in the newly captured town of Awdheegle in the North West of Somalia.
According to the statement issued by the UPDF, the purpose of the visit was to “morale boost and congratulate the joint forces of UPDF and Somali National Army for liberating the town and repulsing the Al shabaab fighters who attempted to attack the forces using two vehicle borne improvised explosive devices on Wednesday.”

Brig Kabango also said the intention of Al shabaab fighters was blow up a bridge near the captured town.
“Although Alshabaab intention was to blow up the bridge, they found you were alert and disrupted their mission. You taught them a lesson and they now know you don’t attack UPDF and go scot freely without scratch marks,” Brig Kabango said.
On Wednesday morning, according to the statement, the Al shabaab using two improvised armoured vehicles laden with bombs attempted an attack on UPDF soldiers in Somalia; “One hit Somali National Army check point and another was destroyed before reaching the bridge.”
The agricultural town of Awdheegle 72Kms Northwest of Mogadishu city, acted as a Logistical Base for Al shabaab.
“It was also an administrative unit (Amniyat) manning illegal checkpoints to extort taxes from traders and vehicles owners. Its liberation by the joint forces of SNA and AMISOM on August 6, 2019, was a big relief to farmers and traders who have for long suffered the brunt of Alshabaab extortionist policy,” statement reads in part.
The UPDF soldiers, serving under Amisom have been in Somalia since 2007 to support the government of Somalia against the al shabaab insurgents who have been fighting to overthrow it.