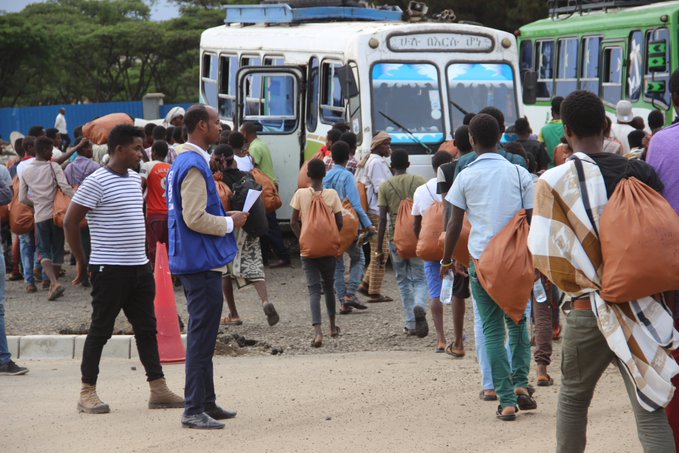 These new returnees are among a large group of Ethiopian migrants from Yemen who have been taken home as part of the IOM Voluntary Humanitarian Return operation that began in May 2019.

“A prominent challenge we are facing is the limited funding for programmes to sustainably reintegrate returnees and tackle the root causes of irregular migration in hotspot areas,” explained Malambo Moonga, IOM Ethiopia Head of Migration Management.

He also stressed that “the limited employment and livelihood opportunities at home make irregular migration to the Middle East through war-torn Yemen a viable option for vulnerable youth in Ethiopia.”

‘I never thought I would face this much difficulty’

Ahmed* (*Names of the returnees were changed to protect their privacy) is one of the fortunate ones who has returned in good health.

Describing his ordeal, the teenager said that he witnessed torture and extortion, which remained strongly imprinted on his mind. “I never thought I would face this much difficulty,” he said.

When the smugglers told him about job opportunities, he thought it sounded like a dream, and left home without his parent’s permission.

However, the hardships he suffered eventually made him change his mind about continuing with the journey.

Yet, many young Ethiopians continue to be lured by smugglers telling them how easy to transform their lives by migrating to the Middle East.

According to IOM, many such Ethiopian migrants have made the treacherous journey and been detained in war-torn Yemen without basic services. They also faced many challenges in accessing protection and assistance.

IOM has so far safely returned 2,742 Ethiopians in the past 50 days, with funding from the US State Department’s Bureau of Population, Refugees and Migration (PRM) through the Regional Migration Response Plan (RMRP).