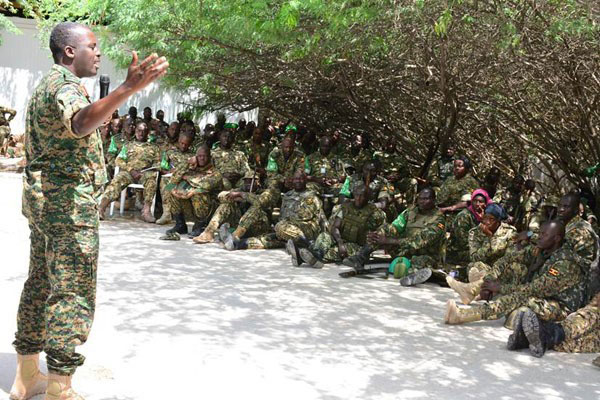 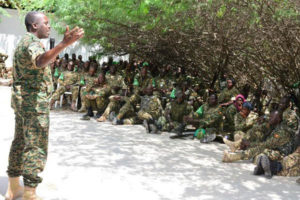 Kampala. The United Kingdom has committed £7m (Shs34b) in new funding to support the African Union Mission in Somalia (AMISOM) to which Uganda, with 6,223 soldiers on the ground, is the largest troop contributor.
The pledge was announced by the UK Prime Minister, Ms Theresa May, on the last leg of her three-nation Africa tour last Friday, according to an August 31 press statement issued by the British High Commission in Uganda.

Ms May visited Nigeria, South Africa and Kenya. Kenya is among countries with troops in the restive Somalia, with which it shares a border.
“Somalia is at a critical juncture and sustainable, predictable funding and support for the troops who are building stability in the region is vital to support a transition to Somali-led security, when the conditions for a handover are right,” the UK premier was quoted in the statement as having said while in Nairobi, Kenya.
Ms May said an unstable Somalia would have a knock-on effect on stability across the Horn of Africa and Great Lakes regions and further afield.
In Nairobi, she visited a UK-supported counter-IED [Improvised Explosive Devices] training centre. Through the centre, British troops help to prepare soldiers from Uganda, Kenya, among other African countries, to deploy as part of AMISOM, the statement said.

Benefiting troops are trained the tactics and techniques needed to identify and destroy the home-made bombs which are increasingly the weapon of choice for al-Shabaab, the Somali militant group.
While at the centre, the UK’s Defence Secretary, Mr Gavin Williamson said: “From supporting counter-terrorist operations in Mali to improvised explosive device disposal training in Kenya, our armed forces are helping to build a more secure Africa. By tackling the terrorist threat abroad we are helping to keep our streets safe at home.”
Besides the Shs34b offer, the UK pledged another £60m (Shs291b) to help over a million people cope with and recover from the impact of conflict and drought.

She said lifesaving food, clean water and medicine, along with support to find stable jobs, will help Somalis to look after themselves and their families in the long-term, reducing their dependence on humanitarian aid.
The UK also committed more than £25 million (Shs121.1 billion) to support Somalia as it works to establish a stable and democratic political system.