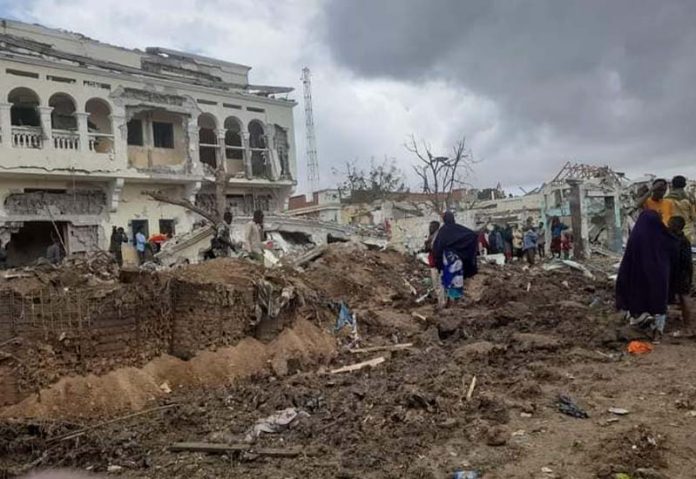 Truck bomb explosion struck a hotel popular with officials in the town of Jowhar, some 90km north of Somalia’s capital Mogadishu on Sunday, injuring more than 14 people including regional ministers and directors.

Images circulated online showed apocalyptic scenes in the aftermath of the blast. A truck bomb exploded at the entrance of Nur Dob hotel near region’s presidential compound in Jowhar, causing extensive damage to the building and nearby houses.

Regional Women and Health Ministers, and former Hirshabelle deputy parliament speaker were among the casualties, officials told local media. Former MPs, directors and other officials have also been admitted to hospital for injuries sustained in the assault.

Al-Qaeda-linked militant group Al-Shabaab immediately claimed responsibility, saying it will later release details on casualties inflicted by the bombing. It comes a few weeks after Somali President Hassan Sheikh Mohamud said he would eliminate the group in a multi-front anti-insurgency campaign.

Somali Prime Minister Hamza Abdi Barre, in a statement, said he had held a phone conversation with Hirshabelle President Ali Gudlawe and “expressed his grief over Sunday’s cowardly terrorist attack” in Jowhar. The Premier stressed that he “firmly stands with the people of Hirshabelle and their leaders.”