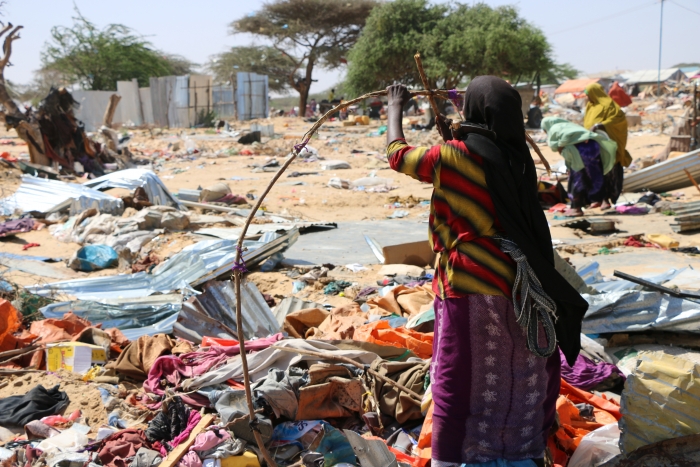 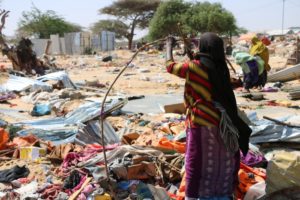 While these women were away from this resettlement camp, their shelters were destroyed. Now they have returned to gather up their belongings from the ruins. They are being evicted by security forces, as the landowner wants his land cleared to prepare for sale or commercial use in Mogadishu. Most people evicted in Somalia, like these women, are given little, or no advance notice before evictions. Due process should be given to all people before they are evicted. January 2018.
© NRC

Over 204,000 people were forcibly removed from their homes this year, nearly double the same period last year, with many people made homeless multiple times.

“Tens of thousands of people who fled drought and violence are being forced from their homes again, only this time from forced evictions. Many of these families were forced to leave with little or no notice. Some have been evicted multiple times, without due process. This is unjust, and violates their rights,” said Evelyn Aero, Norwegian Refugee Council (NRC) Adviser for Information, Counseling and Legal Assistance.

Last year’s drought and conflict, plus flooding this April, led to a massive migration to urban areas. But the shelter situation was already critical, with limited public land available to establish new settlements. Many people who ended up as squatters on public or private land have been evicted in Mogadishu due to a building boom. Displaced families who occupy dilapidated public buildings also risk being forcefully evicted, as many are being rebuilt. Most evictions are done without due process, including without prior notice.

Over 204,000 people were evicted between January and July, almost double the 122,000 evicted over the same period last year, according to the Housing Land Property Sub-Cluster of Somalia. This surpassed the total evicted for all of 2017.

Fadumo Noor, a pregnant mother of four, endured four evictions from Mogadishu settlements. “This is the worst eviction I ever faced. I was at my uncle’s funeral when my family was being evicted. I came home and saw all my children outside, holding pieces of our shelter and belongings. We weren’t given any prior warning.”

Similarly, Halimo Sidow’s family had no time to pack up before leaving: “I faced evictions twice before, however we expected those. This one was unexpected and it’s very difficult to come to terms with. I wasn’t home when the eviction took place, I came back to see my children on the street.” Halimo a farmer with eight children in Mogadishu, had fled drought in Lower Shabelle.

“The Somali authorities and landowners must protect citizens’ rights to adequate shelter and housing. Displaced families should not be forced from their shelters with nowhere to go. They should follow due process, and be given sufficient advance notice to relocate with dignity. These families must be resettled to locations where they can access decent shelter and humanitarian aid. We also urge international donors to increase shelter and housing funding, so more displaced families will have secure homes,” said NRC’s Aero.

While the government has taken note of the crisis and taken steps to address this problem, more efforts are needed. These include developing policies and laws on land, improving access to land for displaced families, and strengthening protection for people displaced.