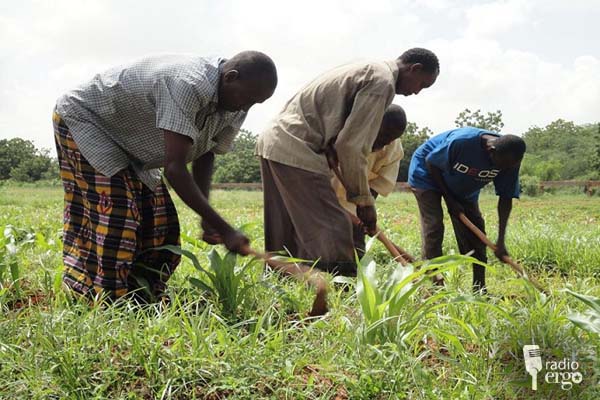 Abdikani Mohamed Dubba, a recent convert to farming, is delighted to have increased his harvest of vegetables by about five-fold after being exposed to training.

Abdikani, who lives Waqdari village south of Lasanod, grows tomatoes, onions, green pepper, red peppers and carrots on his farm irrigated with water from a well.

“We had no skills before – we used to put lots of seeds into holes and they usually died,” he said.

His last yield rose from 200 to 1,000 kgs of vegetables, thanks to the skills he learnt in a training organized by the local youth group, Greening Environment. He is now making around $800 a month from the sale of his produce.

They decided to step inafter hearing so many complaints about crop destruction by pests. The group says it has been targeting displaced pastoralists who ventured into farming for the last three years.

“We did not jump to train the farmers all of a sudden, but we received complaints from the farmers, which prompted us to start training and advising the farmers,” Mohamed said.

Abdirahman Mohamed Abdi ventured into farming after losing his livestock to drought. He grows maize, tomatoes, peppers, and spinach.

“I used to plant my crops in the wrong way. I used to count many losses as pests would invade the crops that we sprayed in the wrong manner, causing crop failure, but now I am grateful. My latest harvest was bountiful,” he said.

He told Radio Ergo that for the last two months he has made $1,000 from his produce, thanks to the skills he learnt from the trainers.

Rahma Ali Abdi Saynab, a farmer in Waqdari village, said her tomatoes, spinach, and pepper are all growing well. Last year, she suffered a near disaster after misusing chemical pesticides.

“I had no knowledge about chemicals. I narrowly escaped death,” Rahman said. “It was a hot day when I sprayed chemicals on the farm and I was almost suffocated. Now,I have good knowledge of the chemicals including correct methods of spraying the farm.”