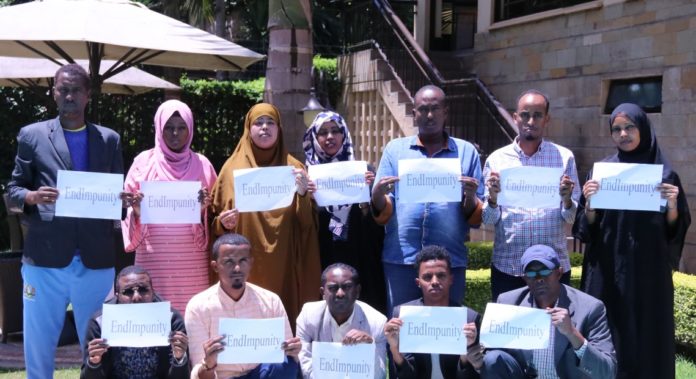 As the world marks the International Day to End Impunity for Crimes against Journalists, Somali Journalists Syndicate (SJS) calls on the federal government of Somalia to investigate all crimes against journalists and bring the perpetrators to justice.

More than 60 journalists have been killed across Somalia since 1992 and 45 of them were assassinated in a targeted killings.  Only last year, 4 journalists were killed and this year the Somali media fraternity lost two colleagues; Mohamed Omar Sahal and Hodan Naleyeh, who were killed in a hotel attack in Kismayo on 12 July.

There have been some positive developments, but there are also challenges due to the government’s inability to end the impunity and conduct proper investigations.  Number of resolved murder cases against journalists account for less than 1% making the country more hostile for the media workers.

Al-Shabaab militant group has most often targeted journalists with complete impunity and the regional authorities in Puntland, Southwest, Jubaland and Galmudug are yet to carry out investigations and arrest killers of the journalists.

The culture of impunity is the only factor that contributes to increased violence against the media professionals and criminals who enjoy total impunity.

“Somalia is now going into a critical transition period which also gives a lot of responsibility to the state security agencies. This should include ending the impunity against journalists in Somalia and ensuring their safety,” Abdalle Ahmed Mumin, the Secretary General of Somali Journalists Syndicate (SJS) said “We urge the Somali government to take firm steps to ensure accountability for violence and attacks against journalists, reversing and resisting the appalling trend of impunity.”

Somali Journalists Syndicate (SJS) and the International Press Institute (IPI) call upon the Somali authorities at federal and regional levels to set up special mechanism to carry out proper and honest investigations into all killings and violence against journalists and prosecute those responsible for these crimes.

“Journalists in Somalia are risking their lives to inform the world about that situation in the country. Attacks on them are reprehensible and stifles press freedom,” IPI Director of Advocacy Ravi R. Prasad said in Vienna. The government of Somalia should do its utmost to protect journalists to strengthen democracy in the country.”