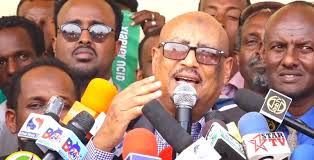 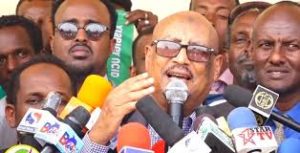 HARGEISA– The chairman of Justice & Welfare Party (UCID), Hon. Faisal Ali Warabe has called on incumbent President Musa Bihi to evaluate his leadership for the past seven months after assuming office of the presidency.

The Opposition figure made the remarks while arriving at Egal airport on Thursday after returning from Brussels where he met with Somali President, Mohamed Abdilahi Farmjo at the sidelines of Somali Partnership Forum held in Brussels in Belgium. Throngs of supporters of UCID gathered at Egal airport in order to give a hero’s welcome the oppsotion figure on his return to the country. Mr. Faisal, speaking to his supporters said that he did not expect such warm and cordial welcome upon return. Mr. Faisal, UCID leader stated that he knew that there was a skepticism to arrest him might have triggered his supporters to gather outside the airport.

Mr. Faisal told that he worked on national matters with all Somaliland presidents, and added that the former president Silanyo will not achieve signing a military base deal with the UEA and DPW takeover with Berbera Port. The chairperson of Justice and Welfare part asserted that he defended President Bihi from Somalia after Somaliland was overpowered in diplomatic arenas while many people thought That Mr. Faisal has turned to be the spokesman of the incumbent president, Bihi. Mr. Faisal has said that Somalia leaders are united to stop Somaliland from getting aid from the int’l community. He further added that most of their leaders have a grudge against SL accusing of toppling the former Somali military leader, Said Barre in 1991.

UCID leader stated that the int’l community will provide 500 million dollars where Somaliland will get 200 million dollars which came after Ali Khalif and Faisal went to Brussels. The chairman also spoke of pictures taken while he was with Somali ambassador to Belgium. He protested that he is connected to marriage. He talked about his meeting with Farmajo which he said was a request from the Somali president. He went on to say that Farmajo swore that he is neither involved in the war nor provided support or weapons to Abdi Weli Gass where his administration is engaged a bloody war with Somaliland over the control of Tuke Raq. Mr. Faisal further asserted that he agreed with Farmajo on the resumption of Somalia-Somaliland talks and also added that he must convince SL people that the war in Tuke Raq is not a clannish war.