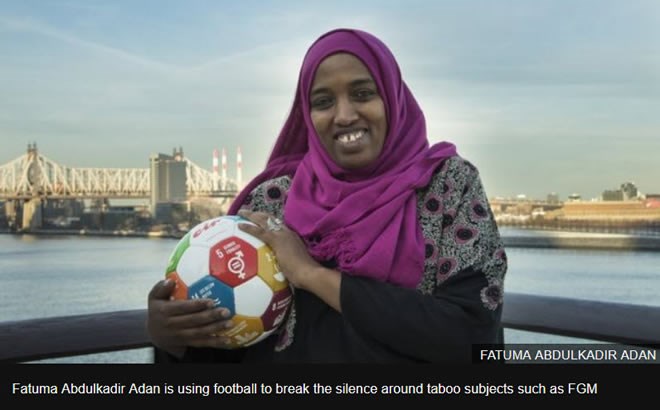 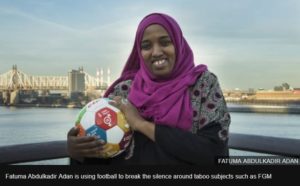 “It would have been an easier option to stay in Nairobi, practise law and earn some good money, drive a cool Mercedes-Benz. But I just wanted to come back home.”

That was the life that Fatuma Abdulkadir Adan could have lived in Kenya’s capital. Instead she chose to focus on football – in an area of the country where it was taboo for girls to play the sport.

“I was physically stoned and literally kicked out of the pitch,” she says of her early efforts 10 years ago, when she started a girls team in the northern Kenyan county of Marsabit.

Soon after they returned from their first tournament, eight of the 12 girls in her team were kidnapped and forced into marriage. It was a sobering false start.

Fatuma founded the Horn of Africa Development Initiative, or Hodi, as it’s known, in 2003.

She wanted to use football to bring people together and create a shift in cultural expectations.

She used football to win over the hearts of the community’s young men after a massacre in 2005 between several of the tribes, which killed 100 people.

“It was an AK-47 in exchange for a place on the football team,” she says.

Soon, the young men had not only given up their weapons, but had also started playing alongside boys from tribes they were supposed to hate.

When Fatuma turned to the girls she wanted to tackle their specific problems including early child marriage and the practice of female genital mutilation (FGM).

Her approach, called Breaking the Silence, has led to 1,645 girls from 152 villages in the Marsabit region of Kenya playing football over the last 10 years.

Empowering the children to stand up for themselves, by making them more confident and capable on the football pitch, has been a big part of her mission, especially in an area where traditional family and tribal structures mean that children and women often don’t have a voice.

“Before it was a cool thing for a 13 or 12-year-old girl to be married,” Fatuma explains. “Today, if you marry off a 13-year old, the girls in the class will complain, as will the boys.”

Hodi also runs awareness sessions on both of the issues in between matches at tournaments and, by educating the girls, Hodi also often educates their parents.

While both FGM and child marriage are illegal in Kenya, local cultures are strong and traditions persist. Fatuma has had to work hard both to argue against these cultures and to work with them.

Her local approach is paying off.

After consulting imams on how she could design a football strip modest enough for many of the Muslim girls who want to play, she now runs a girl’s team in a madrassa, an Islamic school. “I still don’t believe that I am alive to see that happen.”

One girl at a time

While Hodi’s numbers are impressive, it’s seeing Fatuma’s work at play in the lives of individual girls that really illustrates how her innovative approach is transforming lives.

Fatuma Gufu, 14, is the deputy president at her school. She’s been brought up by a single mother in a poor family where she is the only girl. She says that “football has changed her life.”

She’s also in the top five of her class – a position usually reserved for the more outspoken boys, says her headteacher, Madam Kame Koto. “Since she started participating in football league, Fatuma has opened up in terms of her performance and leadership skills.”

“All of this is possible because of the football,” Fatuma insists. “Girls are able to push and also score goals in class and physically on the football pitch.”