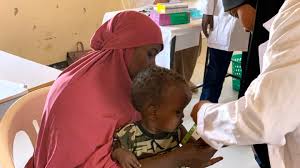 A health worker at the Hadi Health Centre in Borama, Somaliland measures the arm of Niamo Mohamed’s son, to check in on his nutritional status.

BORAMA, Somaliland — Niamo Mohamed lives with her husband and five children in an internal displacement camp in northwestern Somaliland. She is expecting another child.

Her youngest child, who is one and a half years old, is severely malnourished. The family’s diet consists mostly of rice and flour. With the ongoing food insecurity in the country because of recurrent droughts, the price of stable food has increased — making it difficult for them to afford much else.

But it’s not only the family’s diet that is suspect for their son’s condition. The living conditions in the community also play a significant role in malnutrition cases, said Abdinasir Hussein Abdillahi, health and nutrition manager for Save the Children in Borama. He runs the Hadi Health Centre, which screens for malnutrition and provides children with treatment.

“The top cause of malnutrition of kids coming into our clinic is poor sanitation,” he said. Because there are no local water sources or wells, people buy water from trucks, which they often can’t afford, he said. There is also no garbage collection in the community.

The conditions surrounding the Hadi Health Centre underscore the need for strong water, sanitation, and hygiene programming in efforts to tackle malnutrition.

“To get the most out of nutrition, people need to live in a clean environment,” said Kate Medlicott, group leader of sanitation and wastewater at the World Health Organization.

As WASH programming gains an increasingly important role in the global efforts to tackle malnutrition, experts emphasize the need to have programs that reach entire communities, rather than just targeted populations, and the need to strengthen the effectiveness of interventions in light of new research findings.

According to figures from an upcoming WHO report scheduled to be published next month, there were an estimated 28,194 deaths from malnutrition in 2016 associated with inadequate WASH, Medlicott said. “This is likely an underestimate …. better evidence is needed to improve future estimates,” she added.

The key issue is that unsafe water, inadequate sanitation, and insufficient hygiene leads to repeated cases of diarrhea, which can rapidly expel nutrients from the body when the gut is overwhelmed, and intestinal worms, which can also lead to the diversion of nutrients, said Megan Wilson Jones, senior policy analyst of health and hygiene at WaterAid. Either type of infection can also lead to an immune response that can consume energy and nutrients.

Poor sanitation can also lead to environmental enteric dysfunction, a disorder of chronic intestinal inflammation, according to WHO. When a person has this disorder, it can alter the intestine’s villi, which are like creases in the intestine. This leads to a decrease in nutrient absorption, Medlicott said

“If this happens, even if you are getting enough food and nutrients, you may not be able to absorb it,” she said.

The disorder is “assumed to be caused by exposure to bacteria from faecal contamination due to inadequate sanitation behaviours and unsafe sanitation systems,” according to WHO.

But as a largely asymptomatic disorder, EED has not been well-studied by the scientific community, turning it into “a persistent blindspot in nutrition and health programs,” according to the agency.

“A lot needs to be understood about EED,” Wilson Jones said. “It’s still relatively new as a concept.”

An estimated 673 million people practice open defecation globally, according to WHO. Research shows that “chronic childhood environmental exposure to fecal germs can be an important cause of stunting.”

Key to WASH interventions, according to experts, is targeting entire communities. For example, rather than just providing a family that has malnourished children with toilets, everybody in the community should have access to toilets.

“We need to ensure that everybody is using toilets and the whole community is clean. It only takes a few people to actually pollute the environment for everyone else,” said Michael Emerson Gnilo, WASH specialist at UNICEF.

A recent paper published in the International Journal of Hygiene and Environmental Health examined WASH trials and the levels of contamination in the environment, and their impact on diarrhea. It found that “interventions that do not achieve a clean environment have little or no impact on diarrhea” which “underscore the need for entire community coverage.”

But that’s not always possible, because of funding, said Mathieu Fortoul, head of media for Action Contre La Faim.

“It’s not a technical issue for us. We know that it’s best to build latrines everywhere. But the question is how we can fund it? Because sometimes it’s not a priority for donors,” he said.

There is also a need to ensure that interventions such as toilets are effectively containing waste, UNICEF’s Emerson Gnilo said. Over half of the world’s population don’t have access to an “improved toilet or latrine which is not shared, from which excreta are safely disposed of in situ or treated off-site,” according to WHO.

“It’s not enough that we have toilets, because if we have toilets that are leaking into the environment, that waste is not being prevented from getting into contact with people,” Emerson Gnilo said.

Animal waste contaminating communities is also a concern. This pathway to contamination is often neglected in discussions around WASH and nutrition, WaterAid’s Wilson Jones said.

“Children living in low-resource countries might be crawling outside in an environment where animals are around. The child’s mouthing behaviors can lead to ingestion of fecal pathogens, which contributes to malnutrition,” she said.

The body of research on effective WASH programming to target nutrition outcomes continues to evolve.

Recent trials in Bangladesh, Kenya, and Zimbabwe found that improved infant and young child feeding improved levels of stunting, but coupling those interventions with basic household WASH programs didn’t improve outcomes. Additionally, the WASH interventions reduced diarrhea only in Bangladesh, but not Kenya or Zimbabwe.

“That was very shocking to the whole WASH and nutrition community,” Medlicott said. “We were all very much expecting to see health results out of this and they didn’t come.”

A report on these trials recommended that “research in the WASH sector focus on developing and evaluating interventions that are radically more effective in reducing faecal contamination in the domestic environment than the interventions implemented in these trials.”

“These trials make us look back and ask whether our programs are intensive enough to have an impact.” Emerson Gnilo said. “I think we are moving farther and farther away from the standard approach of delivering services and moving to a more context-based programming that addresses critical factors, for a particular context,” he continued.

Some experts agree this includes taking a more systematic approach to WASH interventions. For example, a shift away from an over-reliance on behavior change, which can be hard to achieve, and a heavier focus on policy change, coordinating with governance structures to facilitate wide-scale WASH upgrades and ensuring that financing strategies are clearly defined, Wilson Jones said

There is also a need to break down silos between nutrition and WASH programming, said Kelly Ann Naylor, associate director of WASH at UNICEF. In countries with high levels of open defecation, there is a particular focus on integrating WASH and nutrition programs.

“For example, in Chad and Niger there are particularly elevated levels of open defecation and high levels of stunting and malnutrition. These are some of the countries where we are trying to focus efforts to really join up the WASH and nutrition programming together,” Naylor said.

It can also include working with governments on sharing data, Wilson Jones said.

“Generally, it’s not routine for the WASH sector to prioritize and target the areas of the country with the highest rate of stunting. Whereas we need to get to a place where that is how we work — where we share data so the nutrition department in the Ministry of Health is sharing data with the WASH sector on where stunting is, so that the WASH sector can better serve these areas,” she said.