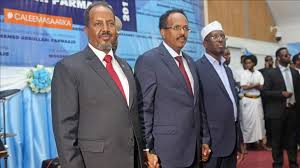 The tensions between the Federal Government of Somalia, regional States, and opposition parties are getting each day more complicated while the election is approaching, however, it is not clear how or what model of elections will take place in the country.

The president of Somalia Mohamed Farmaajo since he took office in earlier 2017, his government faced a lot of challenges and tensions against his administration, as a result, the main actors are the regional states, opposition parties, neighbor countries as well as Al-Shabaab group. There are a lot of incidents that make the situation worst in which the FGS started and create tensions, for instance, the government interfered and changed the previous speaker, Mohamed Sheikh Osman Jawari, after a dispute with the president Farmaajo. Furthermore, the government try to assassinate one of the main opposition parties in the country Abdishakur Warsame (Wadajir Party leader) and killed his security guards at midnight. In addition to that, the government signed an agreement with the federal government of Ethiopia related to the ports of Somalia while the government still did not show any kind of agreement and MOU in the press and the parliament. This creates a lot of tensions not only between the government and the opposition parties but the whole country, following this, the statement between Farmaajo and Abiy Ahmed did not name on which ports the two-sided would develop in the future.

The relation of the Farmaajo administration with the regional states at this time is very complicated, for instance, in 2018, five regional states cut ties with central gov’t due to interfering with the region’s issues, failure to implement security architecture and not fulfilling political agreements. In doing so, in 2020, Jubaland state and Puntland state have zero relations with the Farmaajo administration. In earlier March 2020, for these above reasons, the main opposition parties held a conference in Turkey; the officials of the national forum have finally decided to hold one-party and to have one candidate in the 2021 elections. It’s clear that the opposition parties are working together to resolve the current political and security issues that this country is facing and to win the next election in 2021.

FGS and its war on Somaliland

On the other hand, Somaliland who have been exercising their Independence since 1991 and have been working in the international community with regard the development is still facing problem with regard to talks with Somalia. Somaliland stated that Farmaajo’s government is the worst government in terms of the violating former agreement between them. For example, Under the tripartite agreement signed in March, Ethiopia acquired a 19% stake in the port, joining Somaliland and DP World of the United Arab Emirates (UAE) under a 30 year concession, Somalia declared the agreement ‘null and void’ saying Somaliland had no authority to enter into international agreements, to which Somaliland responded by saying FGS had ‘declared war even the port is still working and the FGS is watching. This incidents creates tension in the parliaments both Somalia and Somaliland. On the side of Somalia parliament, members from Somaliland who claim they represent Somaliland stated that the FGS is against the development of Somaliland. Furthermore, the FGS control alone the airspace without consultation of Somaliland which goes against the agreements reached in Istanbul, Turkey when the former government of Somalia and Somaliland agreed on joint airspace management. In doing so, again, the FGS tried to ban and waging economic war on Somaliland by targeting livestock exports during the Hajj season. Last but least, the FGS president nominated a committee for talks with Somaliland while most of were Siyad Barre Regime members which also goes against the agreement reached and Somaliland’s interests and conditions. This creates on the side of Somaliland to cancel any talks with FGS while Farmaajo is in the power.

Somalia’s president has shown Somaliland unprecedented enmity since he came to the office. For some time now, Somaliland academicians, experts, and senior politicians have been holding a conversation with themselves regards the coming Somalia election 2021. Most of them believe that it is good diplomacy for Somaliland to interfere and has a good role of the next Somalia election for this reasons, firstly, at least Somaliland has influence the politics in Mogdasho and decided to join the political war against the current FGS, secondly, Somaliland will work closely the coming leader of FGS regards with their interest in terms of recognition and development if they participate indirectly the election by influencing the Somalia parliament members who claim they represent Somaliland.

The FGS is not only facing internal challenges but external challenges are there. Changing the political direction of the country creates political anxiety in the country. Former two presidents of Somalia Sheikh Sharif and Hassan Shiekh had relations and a good friend with, UAE, Djibouti and Saudi Arabia. However, the Farmaajo administration changed the direction of the country started a new way of direction which is Turkey, Qatar, Ethiopia, and Eritrea. The Middle East politics and geopolitics of the horn of Africa and competition of superpowers had negatively affected the direction and politics of the country. In doing so, the former presidents of the country, other opposition parties, and their friends include mainly KSA and UAE working with oppositional parties how to win next election in the country, for this purpose, the Farmaajo administration new friends also working with him how Farmaajo to stay in the office and win the next election. The FGS also facing another challenge with regard to the maritime dispute against Kenya.

Somalia’s National Independent Electoral Commission (NIEC) has announced plans to register millions of Somalis to participate in the coming election. Moreover, the NIEC registered political parties but there is a long way to hold one man one vote election due to these reasons. Firstly, many of the states are not working with Mogadishu and NIEC, hence, it is very difficult to hold an election without cooperation between states and FGS. Secondly, the other challenge is technical and logistical requirements need to hold the election. Thirdly, due to security reasons, for instance, Al- Shabaab Groups controls many districts, cities, and regions directly and indirectly, and finally, Somaliland as a separate state which is not possible to participate in the election. For the above reasons, the oppositional parties of the country argued that “anyone who entertains the thought that there will be one person one vote elections in 2020 is paving the way for term extension.” Even though the last election was postponed less than six months during former president Hassan Shiekh’s time, in this difficult time and the outbreak of pandemic disease of coronavirus, no one knows is the government preparing postponement of the election?

In general, if you asking yourself many questions regarding who is going to win next election in Somalia, you need only to understand the above trends and dynamics of the country in order to predict the future president of Somalia, however, you must always keep in the mind that predicting Somalia future president is very complicated and not easy due to last two elections in the country.