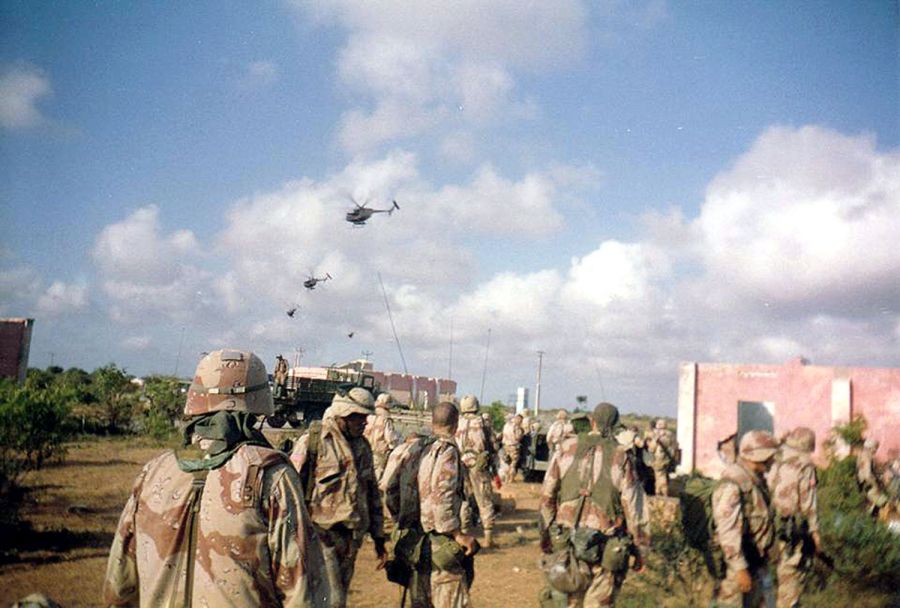 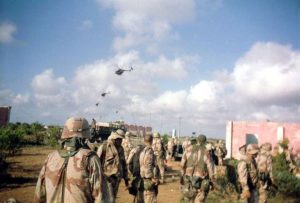 Soldiers of B Company, 2nd Battalion, 14th Infantry Regiment, watch helicopter activity over Mogadishu on Oct. 3, 1993. Later the same day and throughout the night, the battalion’s A and C Companies were part of a rescue convoy assembled for nearly 100 Rangers who had become trapped in the city after two Black Hawks were shot down.

The majority of Americans learned about how U.S. and United Nations forces came to the rescue of 99 ambushed U.S. Army Rangers trapped in the streets of Mogadishu through a Hollywood movie and book of the same name.

But filmmaker and retired Air Force Col. Randall Larsen says the soldiers from Fort Drum, who fought valiantly in a two-day battle in and above the streets of Mogadishu, never got the credit they deserved.

He’s directed and produced a new documentary that depicts the role 341 10th Mountain Division soldiers — from the 2nd Battalion of the 14th Infantry — played in saving the Rangers during the intense fighting on Oct. 3 and Oct. 4, 1993.

“It’s truly the untold story …” Larsen said. “It was an incredible story.”

By the time it ended on Oct. 4, 18 soldiers were killed and 80 wounded, but the U.S. forces fought their way into Mogadishu to get the members of the Army’s premier infantry unit out, despite heavy gunfire. Two Fort Drum soldiers died during the rescue mission, then the bloodiest firefight since the Vietnam War.

Yet the 10th Mountain Division’s involvement is largely overlooked, even with the popular 2001 Ridley Scott “Black Hawk Down” film and the 1999 book by journalist Mark Bowden.

The new documentary, “Black Hawk Down: The Untold Story,” will make its debut during four showings at Fort Drum and Jefferson Community College on Oct. 4 and Oct. 5.

The Oct. 4 showings at Fort Drum will come on the 25th anniversary of the battle’s second day in 1993.

The retired colonel doesn’t fault director Ridley Scott and his film for failing to tell the 2-14’s involvement in the battle. The film mentions Fort Drum but used composite characters to tell Hollywood’s version of the story.

“I’m not saying anything bad about Ridley Scott,” the colonel said. “It was entertainment.”

He also doesn’t have any problems with Bowden’s book, which delved into the Fort Drum connection more.

He does have issues with an episode of History Channel’s series “The Real Story of,” which supposedly told the true story behind the film.

“But it never mentioned the 10th Mountain Division a single time,” Larsen said.

His documentary is devoted to the story of soldiers of the 2-14. All the U.S. forces who fought in the Mogadishu streets were heroes, the colonel insisted.

They jumped into armored vehicles, Humvees and troop-transported trucks and drove off into the dark Somalian night into what was considered a do-or-die mission to save the lives of the Rangers who were surrounded by more than 1,000 well-armed hostile forces.

A year before, U.S. soldiers were deployed to Somalia to support a United Nations humanitarian mission to help with a devastating famine.

Without a government in place, militia and clans were fighting among themselves for power, so President George H.W. Bush sent the troops over to help with more than 1 million people starving from the famine.

For the documentary, Larsen, who served in the Army and Air Force for 32 years, interviewed more than 30 soldiers involved in the battle, from enlisted men in the “Task Force 2-14” to senior commanders.

The documentary also is based on numerous written accounts from those involved, command past logs and official after-action reports.

Ret. Lt. Col. Lee Van Arsdale, a technical adviser for Ridley Scott’s film, appears in ‘The Untold Story.’ A former squadron commander in 1st Special Forces Operational Detachment-Delta, he fought alongside the men of 2-14 during the rescue mission.

Larsen, 70, has produced and directed several other documentaries, including “Operation Whitecoat,” which tells the story of 2,300 non-combat conscientious objectors who served the country during the Cold War.

He also has made documentaries about wounded warriors who served in Iraq and Afghanistan, a doctor’s experiences in the summer of 2014 when he worked in a Sierra Leone hospital during the Ebola outbreak and women pilots who served in the Second World War.

Larsen, who began his military career as a 19-year-old Cobra helicopter pilot flying 400 combat missions in Vietnam, is also a Homeland Security expert, serving on several national organizations between 1998 and 2012. He retired from the military in 2000.

Larsen got involved in the Black Hawk project after receiving a phone call last December from an old friend, retired Brig. Gen. William David, who was the commander of the 2-14 during the battle.

Previously, a couple of Southern Illinois University professors were working on a “Black Hawk Down” film project but had some issues getting it market-ready, David recalled, so he thought that his old friend could help them.

As it turned out, Larsen, who met David while the two were completing War College scholarships at the University of Pittsburgh several years before, bought the rights to the footage and took over the project.

He’s worked on the film full time for the past nine months.

Former Fort Drum soldier Douglas W. Schmidt, a member of the 2-14 from 2000 to 2003, was brought in by Larsen as an advisor to conduct research on the battle.

“I didn’t know much about it,” he admitted, although he saw the Ridley Scott film several times. “I read every book on Somalia.”

Schmidt was chosen for his experience as an unofficial Fort Drum historian. He also completed his master’s degree thesis on the 10th Mountain Division’s involvement in Somalia.

He’s proud of the role he played in making sure that Fort Drum soldiers are finally getting their due.

Until he got that call from his friend, Larsen knew little about the Mogadishu event, quickly forging ahead with as much research as he could before starting the project.

“The more I heard, the more I was impressed with their story,” he said.

A convoy of vehicles was sent to retrieve the Rangers after two Black Hawks were shot down. Before the battle began, the Rangers arrested 20 supporters of Mohamed Farrah Aidid, a Somali military commander and political leader, while they were conducting a raid in Mogadishu.

Besides being outnumbered and facing heavy fire, the U.S. soldiers called to help were forced to use Malaysian armed personnel carriers. They had never been inside the vehicles, were unaware how they operated and didn’t even know how to open their doors, Larsen said.

“They were white vehicles going into battle at night,” he said, making them easy targets.

While he helped indirectly to get the film made, David had no interest in “rewriting history” and wouldn’t have minded “on a personal level” if the project didn’t get off the ground.

“I’m very happy that the story will be told for all the soldiers under my command who were never recognized for the actions of what they’ve done,” he said.

“It’ll give them closure,” he added. “It’s for their benefit, not my benefit.”

Gilbert H. Pearsall Jr., human resources director for the Johnson Newspaper Corp. before retiring in 2014, has a connection to the Mogadishu battle.

A retired lieutenant colonel and former Fort Drum soldier, Pearsall served in Somalia for several months, working at the Quick Reaction Force under Col. Lawrence E. Casper as the liaison to the aviation brigade.

Pearsall was not directly involved in the fighting. Instead, he helped with the planning of the rescue mission, getting together some sketches of where the Rangers were ambushed. At first, the situation didn’t look so bad for the Rangers, he recalled.

“We had no idea what was going on,” he said, adding they learned later that the Rangers needed help.

He remembered heading to New Port, near the Somalia coast, with then-Lt. Col. David and laying out some maps on a Humvee hood to try to figure out a plan.

David came up with the route that the convoy should take and Pearsall went back to Quick Reaction Force headquarters, where he waited to hear more.

He stressed that the story should have been told long ago about the 2-14 and what it did during those two days.

Schmidt has only seen a rough draft of the documentary, but he believes it’s the film that the 2-14 deserves. Still tinkering with the final cut, Larsen said he’s so happy with the outcome he won’t pursue another film project.

“I couldn’t make a better film,” he said.

David, who plans to attend all four showings, said he expects as many as 100 former Fort Drum soldiers will be there for the sneak previews.

Retired since 2003, he looks forward to seeing the men he led when they were in their 20s and will now get to find out what their lives are like 25 years later.

Some of them, at the time, might not have realized the significance of the role they played in saving the Rangers during those two days in Mogadishu.

But their story is now being told.