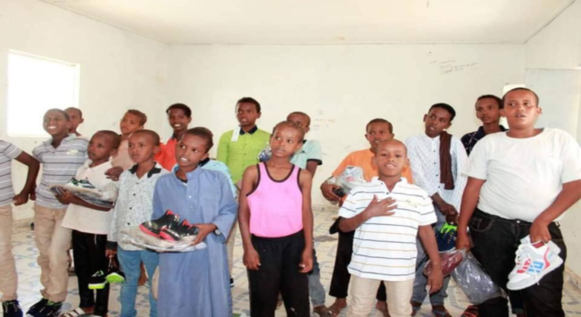 Street children are children experiencing poverty, homelessness or both, who are living on the streets of a city, town, or village. Homeless youth are often called
street kids or street youth ; the definition of street children is contested, but many practitioners and policymakers use UNICEF ’s concept of boys and girls, aged under 16 years , for whom “the street” (including unoccupied dwellings and wasteland) has become home and/or their source of livelihood, and who are inadequately protected or supervised. Street children’ is a term used to refer to homeless children living without any parental or guardian support. They have no basic right to food, health and education.

Somaliland, about 60% of the population is considered to be below the poverty line. Poverty is mainly caused by lack of productive assets, recurrent shocks, high unemployment rates and continued displacement. For all this obstacles street children are increasing in the capital of Somaliland and the other cities in general.

I met different young street children in the middle of hargiesa town. And I collected their opinions.

Ali Adam can not remember a happy moment in his life. “Life was good when I was young. I lived with my parents and two of my sisters and our home was relaxed, but then things changed. My mother got sick suddenly and she was only sick for  2 months and then  she passed away.

Dad didn’t like being alone so he ended up re-marrying, but my stepmother wasn’t too fond of us. Sometimes she blamed us for things we hadn’t done to provoke Dad into beating us.i didn’t put up with it for very long before I  decided to run away. But I did not have a place to go. With nowhere to go I followed the roads to a small trading center. I found a house material workshop which closed overnight and figured out how to sneak inside to sleep at night in that place . I was the only person inside that building at night. I used to wake myself up before dawn so that the owner wouldn’t find me, then walk to the main city to find food and water. I got to know many of the street children but they thought I had a home to go to; I didn’t tell them that I slept in that material workshop at that place.
I was eleven years old when I arrived on the street and I lived there for two years.” Said Ali Adam.

According to UN agencies, 32 percent of children attended primary school between 2007 and 2015 while only six percent were enrolled in secondary school. The statistics are considered unlikely to have improved since, and do not bode well for the future of a country where the UN estimates about half of the population of 4 million is under 18.
Boys in poor families become bread-earners at a very early age and many of them living in the hargeisa area begin their lonely struggle for survival as shoe shiners, car washers and some are beggars.

“I believe I have the right to have  a better life and education, just like the other  children in Somaliland but the poverty, lack of guardians, or low income, took everything, leaving children from poor families like me in misery,” said Hassan yassin, a 12-year-old orphan.
Hassan and many of his friends harbour some hope that Somaliland’s newly-elected president, Muse Bihi Abdi, will succeed where his predecessors failed and help them reclaim the childhood they never had.
“I hope the new president will set up programmes to improve our lives, if he manages to ensure youth development programs. that is, our greatest hope from his government” added, the young boy.
Daud is only 15 but already a well informed political commentator and he is Hassan’s best friend. He told me this. “I started sitting near tea shops where I listen to the radio for a short time every day so that I can be well informed,” he said, towing his can of shoe-shining equipment behind him.
The young boy lives with his mother and two brothers in a shelter made of plastic lining stretched over a flimsy structure of twigs,in over populated village in Hargiesa, “I need to know what is going on in my country and what the president says about children like me. I never have much time to waste sitting in one place to listen to the radio but I want to follow politics and I support the president. He can change my life,” added with enthusiastic voice. Daud continued saying

“I think there is more suffering ahead. I have been a shoe shiner for nearly two years and see no hope for changing and development from our community yet. Everybody dislikes us  in this country and everybody abuses us”.

But I also met another boy who was washing car, near the place where, I met these young street children. Asked his name and he replied,
“ My name is yousef i have no family, no relatives except my street children friend. So I just need to work hard and forget about all this stupid excuses that my friends are telling you.” he snapped, grabbing the lady’s handbag he uses to carry his brush and polish and rushing to the other side of the street where a customer hailed him.

The following steps are much more needed

The Author Abdisalan Ahmed is lecturer and freelance writer based in Hargeisa, Somaliland.