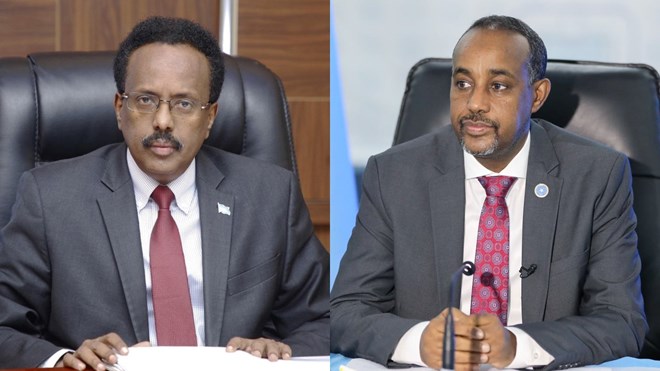 Somalia’s politics has been dominated by the deepening conflict between President Farmajo and PM Roble.

The dispute went from bad to worse on Tuesday as both PM and President released contradicting directives and appointments.

It appeared that the constitutional wrangle was resolved when reports came out that Farmajo finally accepted PM Roble’s dismissal of Fahad Yasin-as Director-General of Somalia’s Intelligence Agency (NISA).

Fahad Yasin is credited as being the architect of President Farmajo’s 2017 election victory and is a close comrade of both the president and Villa Somalia.

President Farmajo on Tuesday made a shake-up in his administration via a statement released by his communication.

PM Roble issued a statement in which he welcomed Farmajo’s acceptance of Fahad Yasin’s dismissal and informed Gobe to take office as soon as possible.

The statement added that the orders issued by Farmajo since the onset of this latest constitutional crisis directly contradict the power vested to the PM to organize elections and that his decision will jeopardize the ongoing investigation into Ikran’s kidnapping and murder.

“The Prime Minister informs Somali people that the two statements from the President in the last two days (6th and 7th of September) expose that he intends to claim the election and security responsibilities that he has already transferred to the Prime minister. Also, the Prime Minister is concerned that the President’s actions are obstructing the effective investigation of Ikran Tahlil Farah’s case; in the same way, justice and the rule of law agencies have been previously barred from exercising a full investigation.”

PM Roble added that the politicization of Ikran Tahlil’s case is a “dangerous existential threat” to Somalia’s governance.

The PM did not mention President Farmajo’s latest decree or his latest appointment in his statement.

It has learned that the Ministry of Information has instructed official government media platforms not to publicize the President’s decrees.

The PM has received support for his audacious move from opposition figures, Hawiye clan elders and the regional administrations of Jubaland and Puntland.

Analysts interpret the move as a way for Villa Somalia to shelter Fahad Yasin as Somalia pushes through a turbulent election year. Observers argue that appointing Yasin as his special advisor would ostensibly place him out of reach from the Prime Minister and his powers.