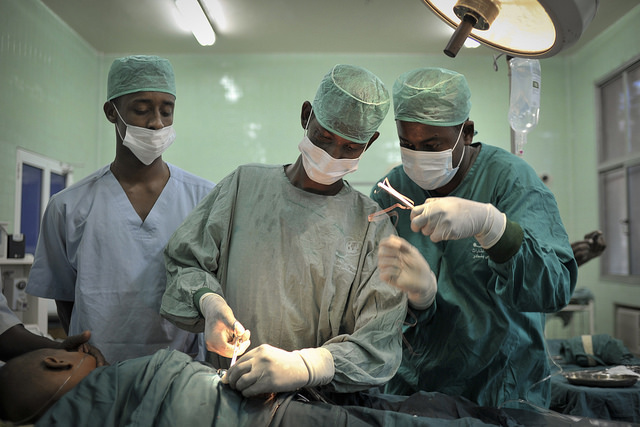 In August 2014, the social and political tensions caused by the Ebola quarantine in Monrovia’s West Point neighbourhood reached a breaking point when police fired into a crowd of civilians, killing 16-year-old Shacki Kamara. Beyond questions of police violence and the failure to effectively manage the quarantine process, the recent Ebola epidemic in West Africa also raised serious questions about the viability of health infrastructure in sub-Saharan Africa. The outbreak began in December 2013 and lasted until 2016. According to the Center for Disease Control in Atlanta, Georgia, it claimed over 11,000 lives and by the end of 2015 governments and aid organisations had spent over 3.6 billion dollars combatting the outbreak. While the epidemic has now largely been contained, the African countries that were impacted by the disease will continue to grapple with the long-term economic fallout of the outbreak for years to come.

The failure of both local governments and international organisations to respond to the outbreak effectively and efficiently provoked a broad range of very timely criticisms, and researchers and commentators immediately set out to locate the origins of this massive public health failure within the long history of European colonialism in Africa.

The three main countries affected by the 2013-2016 Ebola outbreak were Guinea, Liberia, and Sierra Leone, each with their own unique relationship to the history of colonialism. Sierra Leone was a British colony, which won its independence from Britain in 1961. Liberia is unique among most African countries in that it was never formally colonised by a European power. Instead, what is currently the Republic of Liberia began as a settlement colony for free African Americans. Guinea, where the epidemic began, is a former French colony, which gained its independence in 1958 after a famous French referendum where Guinea was the only country in French West Africa federation (AOF) to vote in favour of immediate independence.

Prior to decolonisation, Guinea—like other colonial territories in French West Africa—was part of a federation-wide health system that had its origins in the early twentieth century and underwent a major overhaul during the Second World War. The earliest health interventions in these colonies were intended to protect trade and ensure good health for European colonisers.

Tides began to change when Ernest Roume—who assumed the position of Governor General of AOF in 1902—developed a program to provide free medical assistance to Africans. As historian Alice Conklin has argued, while these programs were provided at least a modicum of health care for Africans, they were geared primarily towards creating a healthier and more productive workforce to support colonial exploitation of African resources.

These programs that Roume and his successors created were, unsurprisingly, woefully inadequate. When the Second World War broke out, the number of fully functioning clinics in the colonies plummeted. In 1946, the chief medical officer for the colony of Guinea wrote in his annual report:

“In 1939, the situation wasn’t brilliant. At the beginning of 1946, it was catastrophic. This scenario urgently calls for a complete overhaul of the [colonial] health system based on a freer, more flexible, and more efficient foundation. The native population is wasting away, disappearing. Our doctors are ready. Give them arms.”

During the war, French doctors and public health officials set out on a quest to improve health in the colonies after the war. They outlined an ambitious program to bring preventative medicine to the empire and placed a particular emphasis on efforts to improve child and maternal health. But as France slowly recovered from six years of defeat, occupation, and direct collaboration with the Nazi government, there was little it could offer the colonies in terms of financial support or manpower to put these plans in action.

While the newly formed World Health Organisation (WHO) offered certain possibilities for support, this organisation faced its own obstacles as it clashed with colonial governments in Africa over questions of colonial politics and segregation.

The mere creation of this office was in itself a coup. Colonial governments had spent years trying to prevent the World Health Organisation from establishing a regional branch on the African continent. Many colonial officials believed that the WHO—with its ties to the United Nations—represented a significant threat to the survival of colonial empires in Africa. The French warned their colonial colleagues at the World Health Organisation in 1949 that by allowing the WHO to create a Regional Office for Africa, they would be giving the organisation carte blanche to “interfere directly and in a permanent fashion in the administration of non-autonomous territories in Africa.”

The WHO finally broke through colonial resistance in 1952 and established its African headquarters in the French-controlled city of Brazzaville, the capital of French Equatorial Africa (AEF). There, the WHO would encounter new obstacles, but this time in the political and social conditions of the colony itself. The WHO, in theory, was an organisation based on the notion of a right to health as well as a broad understanding of the value of social equality. In Brazzaville, staff found themselves having to adapt their programs to conditions that were decidedly unequal. On-going racial segregation plagued the city, despite the fact that its inhabitants had become full-fledged citizens of the French Union in 1946. Unsurprisingly, equality on paper had not produced equality in practice.

As the only delegate hailing from an independent African state, Liberian physician Joseph Togba drew particular attention to the ways in which colonial racism shaped the landscape of public health in the 1950s. He worried that, beyond the segregation that existed in AEF’s capital, white employees might travel across the Congo River to seek after-work entertainment in Léopoldville, where racial discrimination was even more rampant.