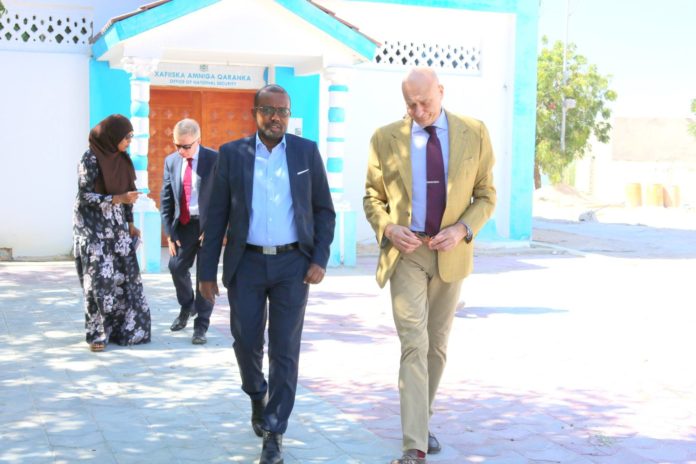 The CivOpsCdr met with the Somali National Security Advisor, Mr. Abdisaid Ali at the Villa Somalia’s Government compound on February 10th. The same day, the CivOpsCdr visited Mogadishu’s Port, one of EUCAP Somalia’s main areas of engagement, mentoring the Somali Police Force Maritime Police Unit (SPF-MPU).
At the port Vincenzo Coppola visited the SPF-MPU operations room, getting an insight of the daily challenges Somali officers face in their daily work. He expressed his appreciation for the dedication of the SPF-MPU who face security challenges on a daily basis.

During his stay in the Horn of Africa, the CivOpsCdr met with EUCAP Somalia’s national and international workforce deployed in Mogadishu, addressing Mission’s personnel in field offices via video-conference.
The meetings included the Commander of European Union Training Mission (EUTM) in Somalia and EUNAVFOR Atalanta’s liaison officer.
Before leaving Somalia, the CivOpsCdr engaged in exchanges of viewpoints with ambassadors from various EU Member states and the U.S.

Appointed in September 2018 by HR/VP Federica Mogherini as Civilian Operations Commander, Vincenzo Coppola leads ten civilian CSDP Missions deployed in Europe, Africa and the Middle East currently employing around 2,000 staff. In this function, the CivOpsCdr also acts as the Director of the Civilian Planning and Conduct Capability (CPCC), the Directorate of the European External Action Service (EEAS), with a staff of approximately 80 running the operational headquarters of the civilian CSDP Missions.
Background
EUCAP Somalia is a civilian EU mission, under the auspices of the Common Security and Defence Policy, which assists Somalia in strengthening its capacity to ensure maritime security.