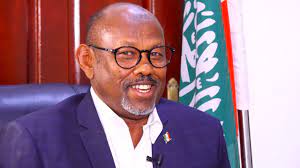 The Minister of Livestock, Animal husbandry and Fishery Hon. Saeed Sulub Mohammed has urged the opposition fraternity to come back to the negotiation table. He stated that violence and chest thumbing will not help them reach their goals.

The minister who was speaking during a press conference he held at his office decried the trend of politicking was taking in recent times.

“The country has experienced new things like tribal meetings, political confrontations and creation of tribal militias in recent times”, he said.

He accused the opposition of denting the country’s reputation as a peace heaven.

The minister wondered why the legal extension of the President’s tenure is soliciting a lot of hues and cries whereas his three predecessors former presidents Egal, Rayaale and Silanyo had theirs extended and depicted good leadership leaving their legacies behind.

He noted that the government had accepted that the elections to be held according to the technical timeline set by the Somaliland National Electoral Commission which is 9 months from the lapse of the president’s mandate.

Minister Saeed Sulub stated that President Bihi had decided to forgo most of the term in the extension of the two years.

He pointed out that the opposition had earlier on accepted the president term extension but later backtracked.

“Anyone denying the presidential term extension is against the peace and security of Somaliland and should be regarded as public enemy number one. He/ she has opposed the law and constitution”, he observed