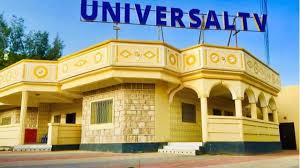 The Minister of Information, Culture and National Guidance Hon. Suleimen Yusuf Ali Kore has revealed that Universal television has been taken off the air in the country hence their local offices have been closed.

The Minister said that the media house outrightly refused to air a national independence day of a monumental impact even after having been asked to do so by the government.

He noted that the same station has for the umpteenth time erred against the principle enshrined in the constitution of this nation and that it was not the first time that they indulged in a wayward act that starks of ill-will.

He said the station has been warned in the past on several occasions hence some bones of contentions were thrashed out after lengthy talks.

Saying that it was incumbent upon the media, including the privately owned, to air or disseminate functions of national days that are specified in the constitution.

He hailed other media houses for highlighting the 26 June event as per the constitution and media laws.

On the other hand, the Minister announced that Star TV has also been also closed, after having erred.