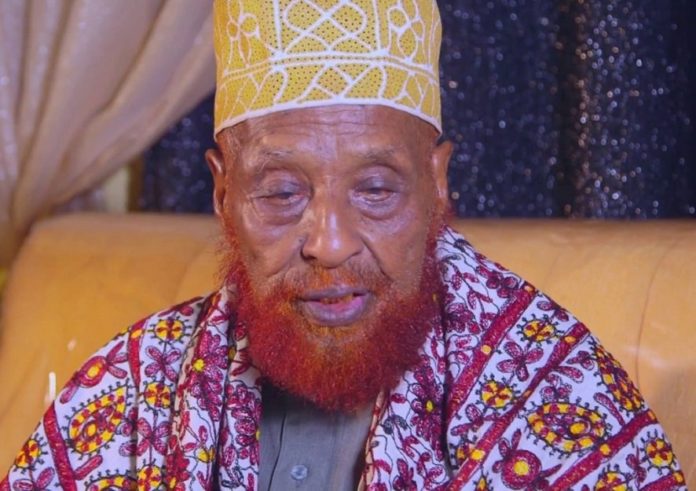 The state of Somaliland mourns its oldest statesman and chief of chiefs, Haji Abdikarim Hussein Yusuf, also known as Haji Warabe, who died on Friday at the Hargeisa International Hospital at the age of 122.

Haji Warabe was a member of Somaliland’s Upper of House of Parliament (Guurti) and was regarded as a symbol of peace and reconciliation in Somaliland since the colonial era through to its independence in 1960 and autonomy from neighbouring Somalia in 1991.

He was buried hours after his death on Friday in Hargeisa according to Islamic rites with hundreds of Somaliland nationals paying their last respect to the man who has lived long enough to mediate disputes for British colonists and then Somaliland politicians.

The unlettered 115-year-old at the time revealed that he was in his 12th year as a tribal leader when Queen Elizabeth II was crowned in 1953. “I remember the Queen’s coronation extremely well. In fact, I remember the coronation of her father King George VI [in 1937]. My uncle attended the ceremony in London,” he told the BBC.

The chief who has been to London twice but has never met the Queen gave a history of how he became a chief and his relationship with the British. “I worked closely with the British colonial officials, and was selected by them as the chief of chiefs. I worked very well with them for 20 years until independence in 1960.

“I liked the British a lot, mainly because they brought peace to our land. When they first arrived, the clans were at each other’s throats. We were killing and fighting each other, and the British put a stop to it,” he narrated.

For Haji Warabe, things didn’t change much after independence as he continued giving advice to both the British and Somali politicians as a chief. He played this role until his death in 2019.

He took the world through his journey of life when Hargeisa was a “wilderness” and how he was a nomad his whole life and has been chief since 1940. “I am now the chief of chiefs, the elder of elders. The most senior traditional leader in the whole of Somaliland. My nickname is Warabe which means hyena,” he told the BBC.

Haji Warabe has always said that he will continue being the chief of chiefs until his death and that is exactly what he did. “I will never retire as elder of the elders. I want to continue for as long as I can – for as long as my brain functions properly. People continue to respect me and I respect them.”

Somaliland is the only self-declared independent state that has survived years of diplomatic isolation by international bodies. The country is internationally recognised as an autonomous region of Somalia.

Somaliland, with a population of about 4 million, can boast of an army, its own currency and legal system and is appreciated for holding credible elections. They made history in 2017 as the first country to use the iris biometric voting system.

The Somali National Movement (SNM) declared Somaliland independent of Somalia on May 18, 1991, after they fought against the government of the Somali Democratic Republic’s military ruler Siad Barre who ruled from 1969 to 1991 following a coup.

Four militia groups including SNM led a rebellion that ousted the Barre regime. The SNM declared the northwestern Somali regions independent and established the Republic of Somaliland after disagreements with the other rebel groups.

The territory has been under pressure for decades to hold unity talks with Somalia.