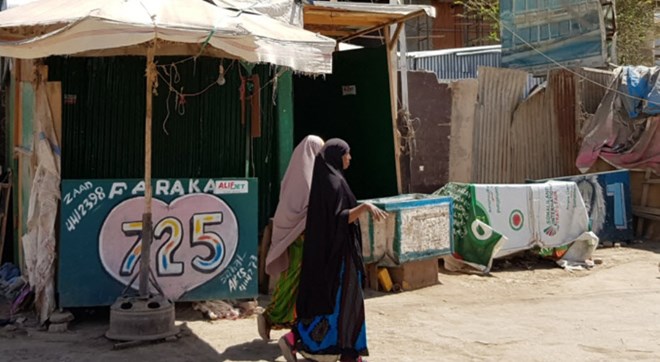 Following a bitter civil war that saw the forces of Somali President Mohamed Siad Barre cruelly bomb and strip the capital of Hargeisa, the Somali National Movement booted out the occupiers and set about creating the conditions for stability in Somaliland which have endured for nearly three decades.

“A place that has made something out of virtually nothing” is how former Nigerian president Olusegun Obasanjo describes the progress made by Somaliland.

His trip there this month was the first by an African president, current or past, since the territory re-declared its independence in 1991. In June 1960, Somaliland gained its independence from its colonial master Britain before making an ill-fated decision to join former Italian Somaliland five days later in a union that was envisaged ultimately to include French Somalia (now Djibouti), the Somali-dominated Ogaden region of Ethiopia (now Region 5) and a chunk of northern Kenya.

Following a bitter civil war that saw the forces of Somali President Mohamed Siad Barre cruelly bomb and strip the capital of Hargeisa (in which by 1990 only an estimated 2,000 of its former population of 500,000 remained), the Somali National Movement booted out the occupiers and set about creating the conditions for stability which have endured for nearly three decades.

Peace did not require vast external resources. There were none available anyway, at the time.

The peace process was constructed on five major internal meetings, starting with the Grand Conference of the Northern Peoples in Burao, held over six weeks, and concluding with the declaration of Somaliland’s independence from Somalia on 18 May 1991.

The declaration was signed in an octangular tin-roofed building near the colonial governor’s building, without electricity and running water, the white walls outside still pock-marked by bullet holes. The peace conferences were managed and financed by locals, bringing their own food and shelter. 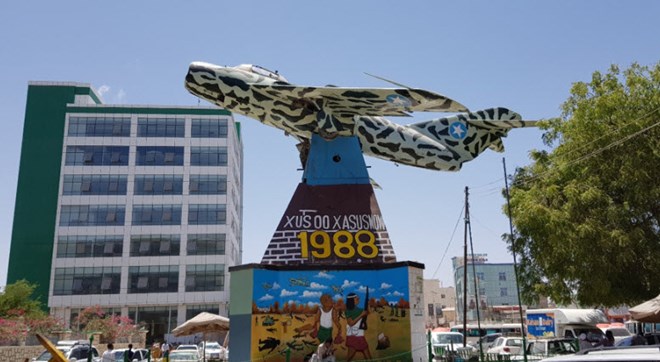 In 1988 the federal government forces of Mohamed Siad Barre bombed Hargeisa, taking off from the local airport to do so. This helps to explain the lack of faith in Mogadishu’s intentions. (Photo: Greg Mills)

They stuck with a winning formula. The last Somaliland conference in Boroma in 1993 was similarly held over five months under the trees.

Such events were bottom-up rather than top-down. Somalilanders concentrated on achieving peace, not on acquiring comforts and financial rents for delegates from the process, a feature which has continually by contrast blighted Somalia’s attempts to the south, where “conflict entrepreneurs” have fed off both the fighting and the talking in a top-down process financed by donors, and which has largely taken place outside the country.

Peace in Somaliland demanded persistence, as has the recovery which has followed.

The former British protectorate has developed a stable, democratic system of politics, merging modern and traditional elements. In 2002, Somaliland made the transition from a clan-based system to multi-party democracy after a 2001 referendum, retaining an Upper House of Elders (guurti), which secures the support of traditional clan-based power structures.

There have since been regular elections and frequent turnover of power between the main political parties. The 2003 presidential election was won by Dahir Riyale Kahin by just 80 votes in nearly half a million from Ahmed M Mahamoud Silanyo. The tables were turned between the two in 2010. Former Somali National Movement fighter Muse Bihi Abdi was elected in 2017, receiving 55% of the vote. 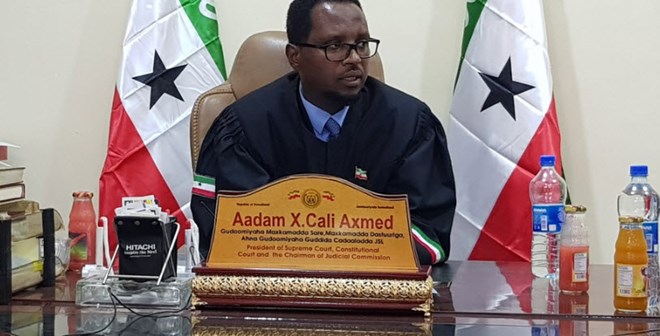 The Somaliland justice system is poorly resourced, like much in Somaliland, but functional. (Photo: Greg Mills)

This is not the only check and balance. The rule of law, says the Chief Justice, Aadam X Cali Axmed, “demands a separation of powers and a strong judiciary.” The court system, which uses codified British law at the centre and forms of Sharia law in the district courts, has found its feet and grown in strength. Here, also, traditional and modern elements function side by side, with community courts outside the formal judicial system deciding on civil matters before reverting back for endorsement.

Critics say that Somaliland’s democracy has been facilitated by the dominance of a single clan, the Isaaq, unlike Somalia, which has to balance the competing interests and ambitions of four major clans and several smaller ones. This argument, however, understates the differences between the Isaaq’s sub-clans and sub-sub clans, ignores the internal violence that accompanied the birth process, which had to be resolved, and overlooks the tremendous hard work that has consistently gone into it to manage the outcomes peacefully and positively.

But peace, however successful, is just the start. 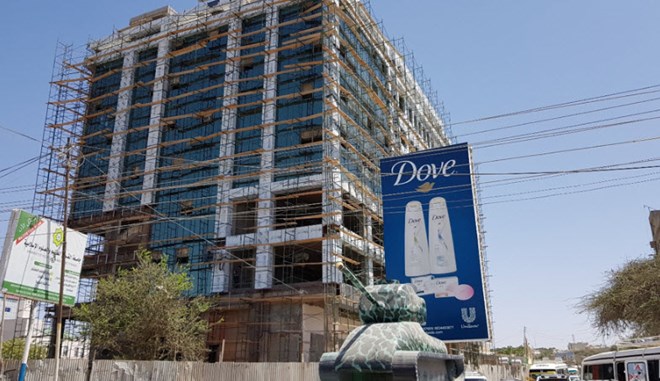 Hargeisa is the scene of much activity and construction work, much of it financed by the active Somali diaspora. (Photo: Greg Mills)

Today, Somaliland’s economy is growing, but straining. Over the past 20 years new businesses have sprung up, yet its infrastructure is poor. Some 70% of the population is under the age of 30. The formal youth unemployment rate is 75%. This situation has been worsened by the paucity of skills, as a result of which there is a contrasting dependency on foreign talent. Literacy is under 45% and just 20% for women.

The Somaliland government budget is just $200-million, three-quarters of which is spent on salaries and operational expenses. GDP is estimated at $646 per capita annually for four million people.

Outside of remittances, which provide 55% of the GDP of $2-billion, Somaliland depends on its sale of camels and goats, though this has suffered with a Saudi foot-and-mouth disease import ban except during the Haj, halving the annual exports to 1.2 million. This challenge has been worsened by the related pressure on grazing areas and the current drought, especially in the Haud, a broad strip of rich pastureland that straddles the Ethiopian-Somaliland border. 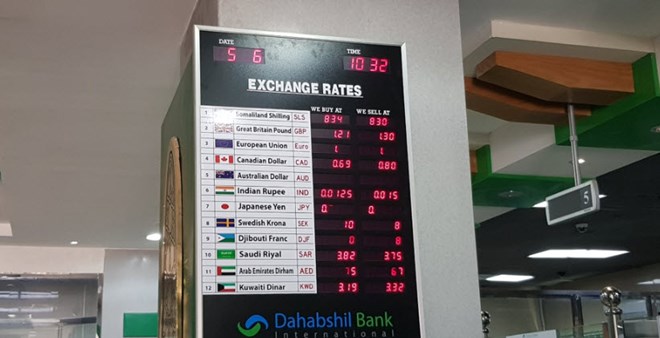 The Somaliland shilling floats, but the cost of borrowing money is high due to a lack of international recognition. (Photo: Greg Mills)

Progress has been complicated by the absence of international diplomatic recognition, adding a risk premium. No foreign government recognises Somaliland’s sovereignty, even though it fulfils all requirements for statehood, including the hosting of regular free and fair elections, the capacity to defend itself and the issuing of its own passports and currency.

Without international recognition, donor funding is just $150-million annually, most of which goes into roads and water infrastructure, and much of the rest into boosting agriculture. By comparison, war-torn Somalia receives more than $1-billion annually, in a perverse system which rewards chaos and penalises stability and democracy.

Ironically, precisely because of its failure, the Somali state headquartered in Mogadishu is little more than a Western-supported and African-military controlled client, leading Somaliland’s finance minister Saad Ali Shire to liken it to “parents throwing money at a problem child”.

In contrast with Somaliland’s self-reliance, without foreign cash and African Union troops Somalia’s internationally recognised government in Mogadishu would either retreat into exile or simply collapse. In Somalia, peace is a multibillion-dollar industry. 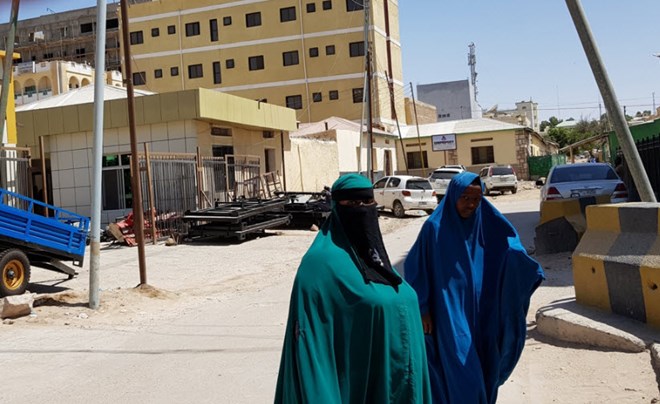 Somaliland has a special status as a vibrant Islamic democracy. (Photo: Greg Mills)

Save the involvement of Dubai Ports World in a $450-million development of the Berbera facility on the Gulf of Aden, foreign investors are few and far between. Although potential investors visit frequently, they are nearly always deterred by a simple challenge: Transferring money to and from Somaliland.

Another consequence of not being an internationally recognised state is that the Central Bank of Somaliland has so far been unable to register a SWIFT code, which would enable direct and secure international funds transfers. Finance sector experts reckon the premium of non-recognition to be “between 7%-8%” on the cost of money.

Within the country, however, transactions are virtually cashless and mobile banks such as Dahabshiil, the largest money transfer agency in Africa and the biggest bank in Somaliland, operate unhindered. The Somaliland shilling floats within a stable band, and inflation is single-digit.

“Somaliland has achieved as much as it has,” says Obasanjo “because it has depended on itself.” But now, for its economy to prosper it needs to resolve its international status.

Yet the most difficult peace negotiations lie ahead.

Recognition of Somaliland is unlikely to come from Africa, given that there is no single African country that does not have the seeds of separatism within it, and they would be fearful that support for Somaliland would imply support for secessionists within their own territories. Instead, African governments have told Somaliland that the most straightforward route to recognition, or at least resolution of its international status, lies through negotiations with Mogadishu.

But the Somali government is unwilling to allow Somaliland to secede, preferring the fiction of historical unity to the contemporary reality of separation. Yet Hargeisa knows that any attempt at reconciliation, at a Somaliland-Somali federation, would necessitate relying on a dysfunctional state in Mogadishu to deliver development and governance, a tall and probably quite foolish order. Somaliland would need some cast-iron guarantees.

To be worth the investment of time and resources, such negotiations should not presuppose the outcome of unity, but should have that option on the table along with independence and perhaps an additional third way such as a loose confederation or even a commonwealth of Somali-speaking nations. They would have to be facilitated by the African Union, not an external power bent on a certain option, as the unity-favouring Turks and Qataris have endeavoured.

There is a lot at stake for the international community. Somaliland’s security situation is stable because it is well-governed. It will not necessarily remain this way forever, not least since the Ethiopian government has become distracted from foreign policy concerns given the scale of its own internal difficulties.

The negotiations would have to include an “ante-nuptial contract” this time around, ensuring the divorce conditions are agreed beforehand. And they would require the donors pressurising both parties to the negotiating table, not playing silly buggers behind the scenes in picking winners and outcomes beforehand.

To be successful, negotiations over Somaliland’s future status, and thus the next stage of its recovery story, will require the sort of diplomacy and patience they were famous for in their internal peace process during the early 1990s. DM

Dr Mills and Van der Merwe are with the Brenthurst Foundation and have been in Hargeisa.