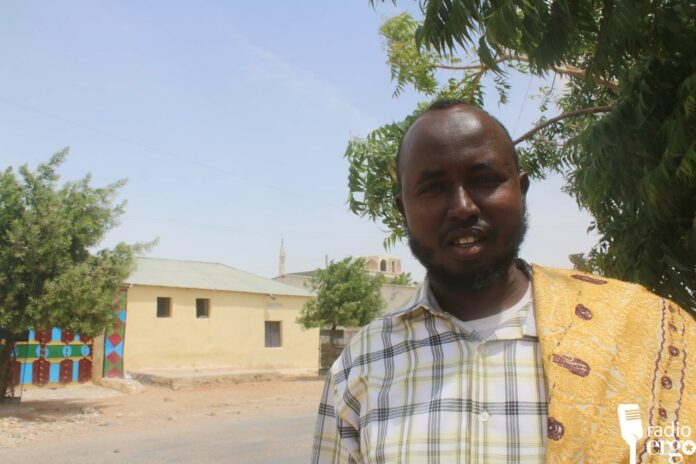 Ahmed Osman, who acted on flood warnings on the radio to save his family recently in Sool/Farah Dubbad/Ergo

Ahmed Osman, who lives in Holhol village in Jidiinka-dodhada valley in northern Somalia’s Sool region, tuned in to Radio Ergo on 27th May and heard aweather forecast that made him take immediate action.

The Wahar-iyarashe stream near his home was filling up as the heavy ‘Gu rains pounded the area. The broadcast carried a warning of impending floods as the water was rising above the banks of rivers and streams.

Ahmed and over 100 other families evacuated their houses after hearing the weather warning, as he explained later to our local reporter:

“That day, I was listening to Radio Ergo as usual when I heard something that attracted my attention. It was the weather forecast warning the locals in the area to keep awayfrom the streams as torrential rains could cause the streams to flood,” said Ahmed, who has been an avid listener of Radio Ergo for the last seven years.

A few days after Ahmed’s family and his neighbours shifted from the valley, Wahara-iyarshe stream did indeed breaks its banks, flooding a wide area.

“We have benefited and got advice from the broadcasts for the period we have been listening to Radio Ergo programmes. We were given rescue and evacuation skills and informed to seek refuge on high ground areas,” he explained.

Some families ignored or did not hear the warning and were cut off by the floods.

“I am aware of one family that was cut off in the area for about a week after the stream flooded. After that week, they were rescued by over 100 people who joined hands to wade through the floods,” Ahmed said.

“I thank Radio Ergo for equipping me with information and helping my family because if I had not listened to the programme, my family would have suffered.”

Ahmed recalled heavy floods in the valley in 2004 that killed 50 animals and destroyed property, at a time when there was no information or warning system available.