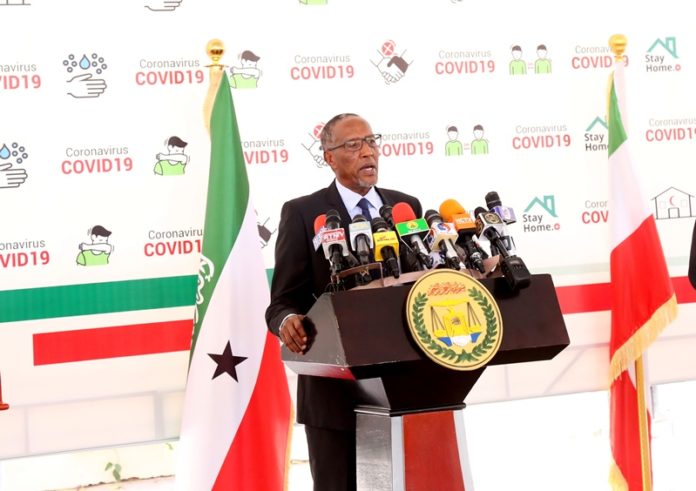 At a press conference which brought together top political leaders of the Republic of Somaliland, Thursday, traditional leaders were asked not to cross onto un-mandated areas which included executive, legislative and judicial national issues.

Along with the House Speakers of the Guurti and the Representatives, the Hon, Suleiman Mohamoud Adam and Hon. Bashe Mohamed Farah, respectively, and the leaders of the two opposition parties of Waddani and UCID, Dr Abdirahman Mohamed Abdullahi ‘Irro’ and Engineer Faisal Ali Waraable, the President, in a show of national unity, took part in a press conference which, primarily aimed to address the COVID-19 issue and how the country should take all possible precautions to contain its negative impact on the public.

“Traditional leaders merit our respect and veneration. In light of this, it is only proper and perfectly within their rights that they, too, stay within their proscribed traditional, pacification roles and not cross onto areas they are neither prepared for nor have any meaningful role in,” President Musa Bihi Abdi stated.

The President went on to state that of recent said leaders had been discoursing on diverse fields that were way beyond their competencies.

“A traditional leader customarily presides over matters other elders of his clan deliberate on, summing up their conclusions and stamping their resolutions, He is not supposed to be the lawyer, the complainant, the plaintive, the jury and the judge all rolled into one as has become the norm with some of them these days. A traditional leader who goes on media talking of everything but that to which he was mandated has crossed lines he shouldn’t have,” he said.

President Bihi said if that anomaly does not cease on the part of said leaders as it should then one should be prepared for the consequences.

“Culture is culture. Politics is politics. The two do not mix. Clan leaders who meddle in politics must bear the consequences of their actions if they do not desist from doing so as they should,” he said.

The other leaders, too, echoed similar conclusions asking traditional leaders to refrain from undue meddling in politics unbecoming of their roles and mandates.

A number of traditional leaders both in Hargeisa and Las Anod had, of late, assumed political roles in which they argued that they had a right to lead political talks between the Republic of Somaliland and Somalia which had not reached any binding conclusions since 2012 when they started.

The burst into public limelight through media events coincided suspiciously with the Prime Minister of Somalia, Hassan Ali Khairre, letting it known that he was going to lead the Somalia side of the talks. The Federal Somalia PM made his intentions known right after a visit he made to Addis Ababa ensconcing with the Ethiopian Premier who was said to be keen on taking a leading, mediator role of the talks.

The coincidence was made more suspect by the fact that: (a) The Somalia PM office had, since 2017, been orchestrating activities sabotaging the fabric of Somaliland unity and its determination to restore an independence it lost to Somalia in 1960 through a rash zeal on its part for a Greater Somalia republic which included Djibouti, NFD and large parts of present-day Ethiopia; (b) Prime Minister Abiy Ahmed showed an unhealthy affinity to Somalia President, Mohamed Abdullahi Faramajo, even though Somaliland had stood by his country through thick and thin for the past 30 years where he was, in the meanwhile, losing life and material on Somalia; (c) The Ethiopian PM had not concealed ambitions to unite the Horn of Africa region under a hegemony he led on the guise of regional ‘economic’ and ‘socials’ blocks; and (d) that neither Somalia nor Ethiopia had not for once acknowledged the legal and historical rights and precedents of the Somaliland claim nor its exemplary, separate track record since 1991.