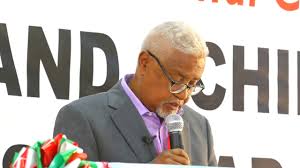 HARGEISA–Somaliland opposition Wadani party has said that President Bihi has failed to remain neutral on the lawsuit between GSK holding owner, Mr. Ahmed Osman Geele and the BCIMR bank based in Djibouti. Mr Abdikadir Jirde, the acting chairman of the party in a press conference held its headquarters accused of president Bihi’s administration of being representative to the government of Djibouti. Mr. Jirde has said that it is a disappointing thing which has caused divisions among the public and put a question mark over Somaliland’s statehood. The acting Wadani chairperson has stated that the government has taken this stance unexpectedly. He wished that president Bihi’s gov’t might have taken an arbitrary role which will bring the two sides closer rather than siding with Djibouti government over the controversy. The chairman went on to say that it has lost the confidence over the mediation of the case. Mr. JIrde has asserted that Mr. Ahmed Osman Geele is citizen and is one of the biggest investors in the country. He bankrolled the Coke plant with 20 million USD of investment in Somaliland. The Wadani chairperson has also talked about that the talks for three political parties which lasted for quite some time have failed to bear fruit. The three political parties have failed to reach a common understanding of the election dispute which ended without result. He also spoke of the recent high level visit embarked by European Union countries which revealed their stance if the country fails to hold free and fair Parliament and local council polls.