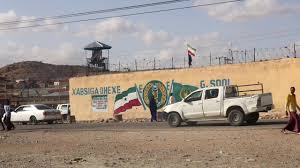 Soldier from the custodial corps in Lasanod who killed his colleague has been publicly executed on Tuesday at Bali Harac settlement in Sool region. The execution by firing squad of the soldier has been agreed of the clans from both sides. Mr. Mohamud Iidle Adan who has been executed today had gunned his colleague on the 16th of September, 2019. The shooting injured a woman nearby who was later taken to hospital.  The execution of the soldier saw the participation of elders, religious leaders and intellectuals in Bali Harac. The Custodial corps from Somaliland particularly those in Sool region has not spoken of the execution of the soldier where the two clans have agreed.

Lawyers and human rights associations have cried foul of the hastiness of the execution and preferred that the soldier who was accused of murdering his colleague should have appeared in the court.