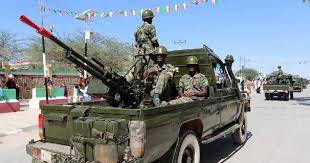 Somaliland gov has sent its troops along its frontier with Puntland as tension is running high. Military reinforcements from Somaliland have reached Yubbe, Hadaaftimo, Damala Xagare. This is intended to secure the border with Puntland which has been a source of infiltration in Somaliland territory to cause some sort of insecurity in the region. There is a possibility that clash is likely to take place as Somaliland is amassing its troops in the border regions with Puntland. Residents in Yubbe have confirmed that they saw with their naked eyes Somaliland troops with armored vehicles who have established in the border with Puntland. In an interview with Bulsho Somali TV, the former Somaliland information minister, Mohamed Dahir Ukuse has commended the incumbent president for securing the border and Somaliland troops making its presence in the eastern Sanaag region to secure the border from Puntland destabilizing incursions. The ex-information minister has said that the weak Somali Federal Gov in Mogadishu is fueling the war that Somaliland is involved with Puntland. He stated that the administration in Puntland has been the trouble maker in the eastern regions where it has posed threat to the tranquility that the region enjoyed. The ex-presidential spokesman has clearly stated that Somaliland reserves the right to secure its border and its troops should set up stations. He urged the residents living in the eastern of Sanaag to welcome the troop presence where they will maintain peace and security in the region. The troops will also prevent any acts of destabilization plotted from Puntland. He added that they will be a vehicle for the creation of institutions that the eastern Sanaag have been yearning for over the past 28 years. The Mogadishu administration has done all it could to undermine Somaliland’s stability but all its attempts have ended in vain. Somaliland, Puntland have swapped prisoners of war captured during Tukaraq skirmishes in Sool region.