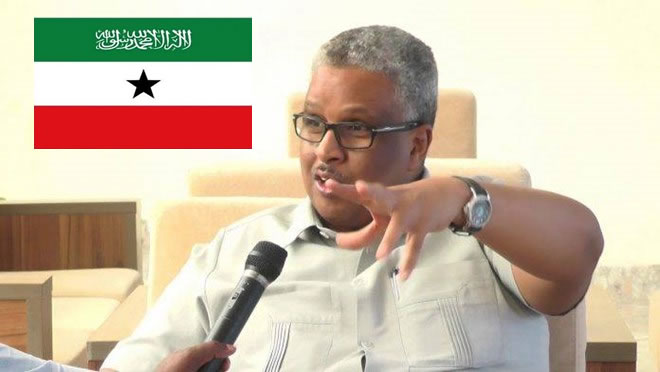 Somaliland says its flag started flying over a de facto diplomatic mission it allegedly opened in Djibouti, in a sign of defiance amid reports that the enclave faces a new diplomatic pushback from several countries in the horn of Africa region following the recent regional integration summit in Ethiopia last week.

Several countries including Ethiopia and Eritrea have reportedly ‘come to the conclusion to disengage from diplomatic ties with Somaliland’ during the recent meeting by the leaders of Somalia, Ethiopia and Eritrea in which they agreed to cement a new regional integration policy, following an intense pressure by Somali government to break with what it regards as a ‘province in its territory’.

If confirmed, Ethiopia’s break with Somaliland leaves the enclave now without close partners as Ethiopia remained the only nation which maintained a consular mission in Hargeisa, Somaliland’s capital. Despite maintaining informal relations with Somaliland, other countries avoided establishing any diplomatic presence in the region.

“Our flag is proudly flying over our embassy in Djibouti, and in our possession is everything that every other country does have.” said Abdifatah Said, Somaliland’s representative to Djibouti.

Hiiraan Online cannot independently verify the veracity of the claims and if Somaliland has formal diplomatic relations with Djibouti amid reports that relations between the two sides remain strained after Somaliland signed a port deal with UAE’s global ports operator, DP World, a move which had allegedly angered Djibouti.

Djibouti officials were not available for comment on the development.

Responding to the new diplomatic maneuvers by Somali president who is reportedly working behind-scenes to convince regional allies to turn down attempts by Somaliland to maintain relations with them and recognize it as a Somali province, Mr. Said warned that Somaliland ‘will not cower’ in the face of attempts to isolate it from the region.

“To Farmajo’s government: We are well aware that you’re all hard-pressed in undermining Somaliland, and yet still maintaining holding talks.” He noted angrily.

“That’s unmatchable – and you should get your facts straight.” He said.

For years, Somaliland which has declared a unilateral independence from the rest of Somalia in 1991 had maintained informal diplomatic relations with neighboring countries including Ethiopia and Djibouti. But according to analysts, a new regional politics’ shift by horn of Africa leaders threatens to isolate the enclave which is struggling to get an international recognition despite pressure by Somali government which maintains its assertion that the northern territory is parts of greater Somalia.