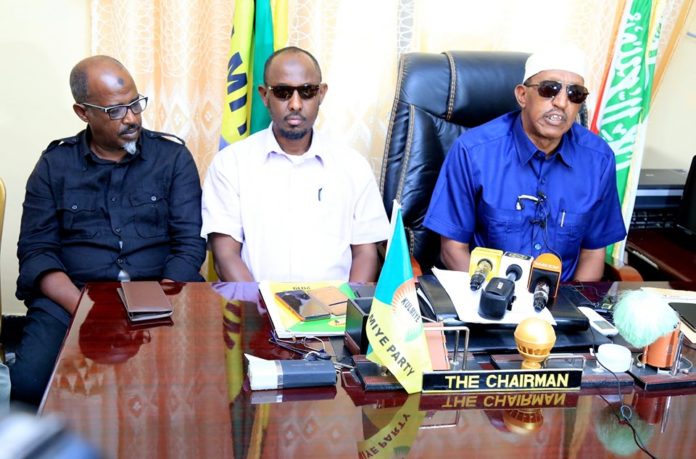 The controversy surrounding the nomination of Abdirashid Riyo-raac to the independent electoral commission refuses to subside.

Today, Kulmiye Party refuted that president Muse Bihi nominated a member of his party to the electoral commission.

The controversy over the nomination of Abdirashid Riyo-raac to the electoral commission seems that it is not going anywhere. Today, at a press conference, Kulmiye Party denied that Abdirashid Riyo-Raac is a member of the current Central Council of the party.

This came a day after Waddani Party displayed a booklet of the central council of Kulmiye Party members which included the controversial Abdirashid Riyo-Raac.

The chairman of Kulmiye’s central council announced that they will sue Waddani party for misleading the public and making up lies.

“It is not appropriate to mislead the public. The leadership of the Kulmiye central council will pursue the matter. We will sue the people who have been misleading the public and espousing lies all night on television. They will have to prove their claims.”

Kulmiye party also displayed a book containing an allegedly updated list of the central council members. In this list, Riyo-raac’s old number is taken up by another member.

The controversy over Riyo-raac’s affiliation with Kulmiye Party is because the electoral law forbids party members from serving in the independent electoral commission.