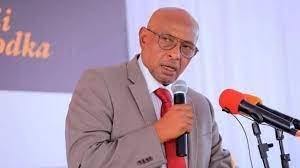 Somaliland government has said that it will remain neutral to the war in Ethiopia, this was disclosed by SL’s Minister of Foreign Affairs & Int’l Cooperation, Dr. Isse Kayd, in an interview he gave the Somali BBC radio.

The FM has stated that  Somaliland welcomes efforts underway to restore peace and security in Ethiopia, but reiterated that the stance and the policy of Somaliland’s Foreign Ministry is to not meddle the internal affairs of Ethiopia.

Dr. Kayd said: ” We support all efforts underway to bring peace to Ethiopia. Our foreign policy pertaining to the ministry of foreign affairs stance on Ethiopia war is not to interfere.

The FM revealed that President Musa Bihi of the republic of Somaliland held high level discussions with the president of regional state in Ethiopia focused on boosting the security and intelligence cooperation between the two sides.

Isse said: ” Cooperation was discussed concerning peace and security and exchanging intelligence information was also part of the discussions.”

Somaliland, Ethiopia have bilateral ties on the areas of security, trade and the fight against extremists.