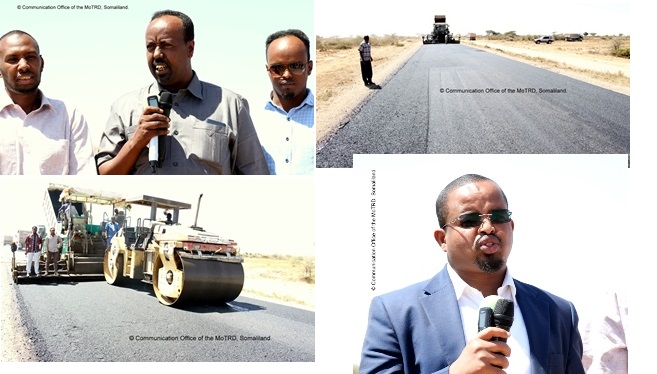 Mr. Ahmed Yusuf Mohamed, the managing director of Somaliland roads development agency leading a high-level delegation on Saturday embarked on a working visit in Gabiley region to inspect and evaluate the ongoing road construction works on the Hargeisa-Kalabah Highway.

The delegation led by the MD of the roads development agency included Mr. Mohamed-Amin Omer Abdi the Mayor of Gabiley Town, the deputy MD of the roads development agency, Gabiley town councilmen and engineers from the Ministry of Transport whose mission was to evaluate the Hargeisa-Kalabaydh Sustainable Road Maintenance Project (SRMP) funded by GIZ and built by the Hono Group.

Mr. Maulid Nuh, the chief project engineer in charge of the construction of the road was awarded a certificate of appreciation for the excellent work by Mr. Mohamed-Amin Omer Abdi the Mayor of Gabiley Town

The Hargeisa-Kalabah Road Maintenance project is currently underway with a 48km road asphalt paver already built and we hope to reach 49km mark today; Work to fill potholes in a stretch of the road whose distance is 56km is ongoing and we have completed 27km and 52 culverts along the Hargeisa -Kalabydh road section have been repaired and cleaned to control floods during the rainy season.

Some of Gabiley town Councilmen who spoke at the venue said they were pleased with the modern construction of the highway between Hargeisa and Kaladhh, noting that the road was constructed in a modern and good way and thanked the engineers from the roads development agency and the ministry of transport for the superb road rehabilitation works in Somaliland.

Mr. Mohamed-Amin Omer Abdi the Mayor of Gabiley Town commended the MD and deputy MD of the roads development agency and the ministry of transport for conforming with international standards and making sure that are applied in all ongoing road construction works.

The deputy MD of the Somaliland roads development agency said, “The Somaliland roads development agency in conjunction with the Ministry of Transport has put a lot effort in the transport infrastructure especially the Ergavo and Hargeisa Kalabaydh which is vital for the country’s economic & social development and I would like to remind the residents of Gabiley and those who voted for President Muse Bihi and Kulmiye party that their votes were not in vain.

Mr. Ahmed Yusuf Mohamed, the managing director of Somaliland road development agency said that the agency was very pleased with the ongoing road rehabilitation works for the highway linking Hargeisa to Kalabaydh.

He added, “I pleased with ongoing road works which are undertaken in three different sections of the road which include filling of potholes, the current location we are now is where asphalt laying work is ongoing and the other location the road lights and signs are being installed, and thank the Gabiley regional authorities who have really been working with us so far and since Gabiley County council has put in a lot of effort and resources to beautify the road. The roads development agency and the ministry of transport have provided the technical know-how(engineers) as well as the provision of equipment and material form part of the project’s scope”, he said.

Finally, the MD  thanked the Mayor of Gabiley for awarding the chief engineer with a certificate of appreciation which is an acknowledgment of the good work by Somaliland road development agency and the ministry of transport as a whole.