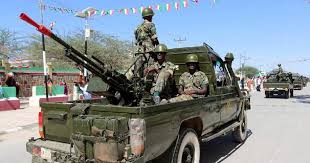 Somaliland and Puntland forces have clashed on Tuesday in Damala Hagare settlement in the east of Sanaag. The skirmishes erupted after Puntland’s education minister tried to pay a courtesy call to Caramala settlement which is under the administration of Badhan. The minister of justice of Somaliland is currently visiting Badhan and Somaliland military forces blocked the delegation from Puntland led by the minister. The commander of Somaliland’s armed forces stationed in Badhan, lieutenant Hussein Aden Farah aka Farah Dhere told has confirmed the aborted attempts of Puntland minister to visit Caramala. He said due to the presence of Somaliland defense forces prevented him to come to the settlement. The lieutenant has said that the minister tried to come to the settlement in order to bring the national exams to the settlement. The deputy minister of interior of Puntland has confirmed that clashes reported between Somaliland and Puntland forces in Damala Hagare.

The deputy minister has confirmed that three soldiers from Puntland were killed in the clashes as he added that there are other casualties. Puntland ministers constantly violate the territorial sovereignty of Somaliland and reports say that ministerial level delegation from Puntland are currently visiting Yube. Somaliland and Puntland are in dispute to the ownership of Sool, Sanaag and Ayn. Somaliland claims the territory on the basis of border demarcation that dates back to the colonial era whilst Puntland argues that tribes inhabiting in the region are their next of kin.