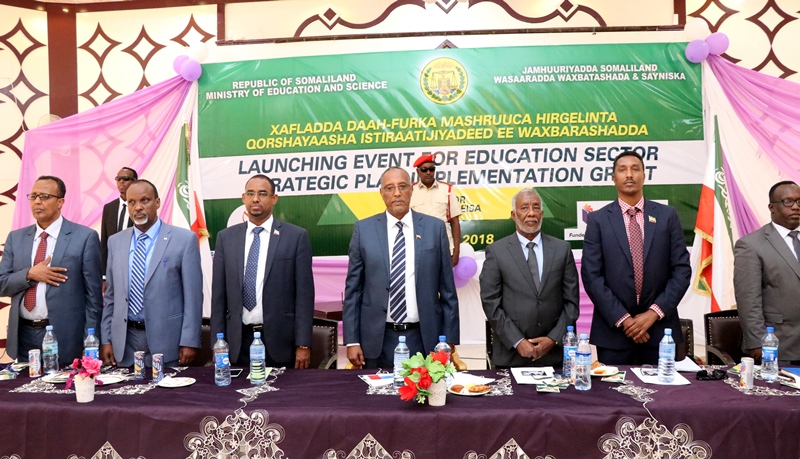 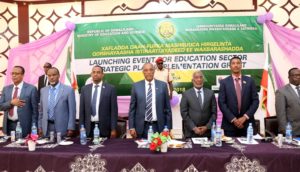 The first to speak at launching function of the new education strategic
plan was the director general of ministry of education Mr.Mohammed Farah
Hareed who confirmed that the 3 years program will target primary schools
and will benefit 17,000 students.

The minister of national planning Mr.Awale stated the importance of
developing the education infrastructure of the country which he said
catalyzes development. He went on to say that his ministry is in support of
upgrading of the nation educational system.

Also speaking at the event was the education minister who informed the
head of state the importance of this project in upgrading the country’s
education system here in are his sentiments “Mr. President this program
seeks to uplift and develop the education system of the country to new
heights God willing. It is a 3 years project and internationals
organizations supporting education have promised to equal the monies the
ministry receives from the treasury. This means that whatever the
government budgets for education are the same amount international NGOs
will give the ministry of education.”

The minister told the head of state that the funds will be specially
utilized to develop a strategic plan worth commending.

He added “First and foremost we shall start by training teachers, building
of technical institutions to train artisans, equipping and furnishing
school and motivating educators.” Minister Faratoon revealed.

The president emphasized the importance of education in national
development and praised the minister and his lieutenants for insight in
enacting worthwhile policies.

The head of state informed the populace the importance of teachers in the
society he stated they are like parents to student.

“Teachers receive peanuts and are content with the little money they earn.
For instance if a poor mother with ten children gets two loaves o bread
she gives to her children while she goes hungry likewise teacher never
become rich but are happy to see their student succeed in life.” The
president said.

The president urged the country to unite in implementations of this
education strategic plan that will cost 8.2 million dollars to execute.