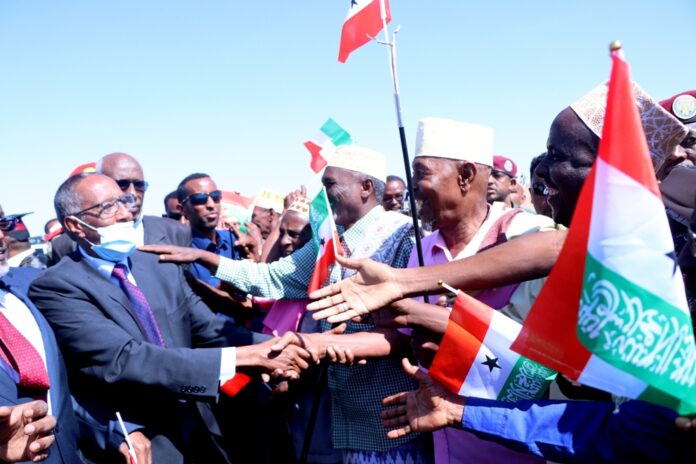 Somaliland president commenced his working tour in the eastern region of Somaliland on Sunday. His first port of call was the port city of Berbera.

Multitudes lined up on both sides of the pavements of the main road into Berbera to give a rousing welcome to their president. The people could be seen chanting and waving their hands as a welcome gesture.  He carried out a tour of the Berbera port expansion programme underway and which is close to being finished now. He also visited important places in Berbera, including government departments and Berbera International Airport which also witnessed a huge development since DP World took control of it.

DP World that runs the port unfolded a red carpet when he entered the port zone. Last night, he slept in Berbera city to inaugurate the government co-funded projects which had already been finished.

Yesterday’s morning, the president journeyed from Berbera to Buroa to participate in the graduation ceremony of the University of Buroa and the inauguration of a big modern shopping mall in the city.

The president arrived and delivered a moving speech at the University of Burao graduation ceremony by saying, ‘we have to rely on ourselves and cease dependence on foreign aid. Do jobs create jobseekers or the jobseekers create jobs?’ he rhetorically asked.

He referred to the late Ibrahim Dheere as an illiterate, but who did not let his shortcomings hold him back and went on to create a global business empire that transcends borders.  He criticized batches of graduates who come out of mediocre colleges and are dumped in the job market without having the requisite skills to survive in the real world. His government did not promise anything to the fresh graduates, instead he urged them not to wait for the government to spoon-feed them.

‘I need you to check and monitor me from abusing the public funds but you should make sure whatever you are saying is true before posting baseless allegations on social media,’ the president said in his speech to the graduands.

‘I was told the University of Buroa’s campus is occupied by ordinary people and we can’t force them out and kill them lest their tribe may take gun and fight alongside.’

He told the audience to be wary of the enemy that keeps seeking for a spot in Somaliland ‘because Buroa is the birthplace of Somaliland and the enemies hate it a lot’.

He finally came down to the horrific murder of a college student and mother with three sons in Buroa this week. ‘This woman’s death was more than a murder, and I shall execute this case as soon as the courts pass it to me. I promise to effect judgment quickly’.

He is expected to include Oodweyne into his working tour and visit it yesterday or today where he will inaugurate government projects that have been completed.

The governor of the Central Bank of Somaliland Ali Ibrahim Baqdadi commissioned a district bank branch to serve the residents of the Oodweyne town. The president is expected to visit and officially open it for use.

This is the second trip that President Muse Bihi Abdi has made to the eastern region since his election three years ago.

A week or so ago, the president visited the western region to monitor the people’s life and open a government-funded project of a small bridge, desperately needed infrastructure by the students of Amound University and residents in the surrounding areas.

The president may extend his visit to other parts of the eastern regions and include Las Anod, Erigavom, and other places worthy of being visited.

No schedule for his return to the capital has been officially set.