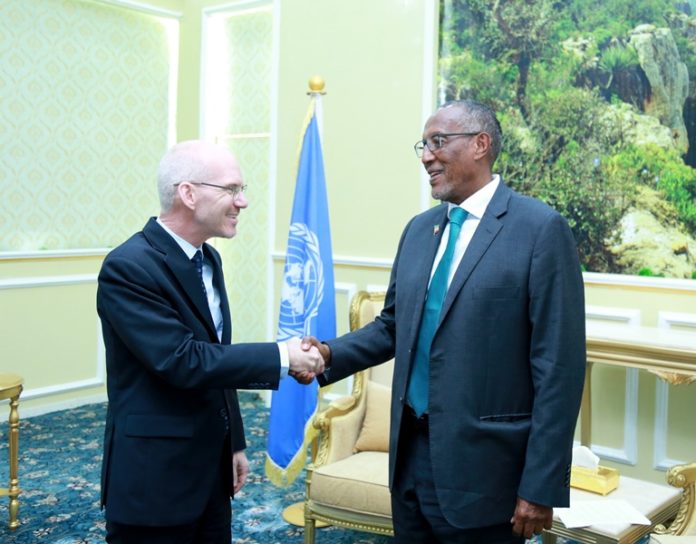 The President H.E. Musa Bihi Abdi held a significant meeting with the UN Security General’s Representative to Somaliland and Somalia ambassador James Swan on Thursday when the latter paid the Head of State a courtesy call.

According to a Presidency press circular released on the 9th of January 2020, the meeting dwelt on extensive issues with major focus on the bilateral working relations with the UN and Somaliland’s feeling on the UN’s and international Community’s (IC) as concerns the country’s developmental aspects.

“Several issues were pondered upon by the President and the UN delegation”, said the Foreign Minister Hon. Prof. Yasin Mohammed to the media fraternity following the meeting.

“Most importantly”, the minister added, “was the fact that the President sent through the representative a message to the UNSG noting that as a de-facto state the country has been able to manage its internal affairs as far as development, security, stability and general administration is concerned as a sovereign nation quite successfully”.

The minister further stated that the President’s message contained Somaliland’s reservations about the UN and IC bilateral relations as far as the grants and aid in capacity building for state coffers, creation of employment, education, health, water resources and supply developments were concerned.

Prof. Yasin further stated that the UN SG’s representative was informed the fact that Somaliland has jumped over hurdles of internal disagreements hence were eager to resume the stalled Somaliland-Somalia Talks such that the country may put forth defense of its deserved aspirations.

On the other hand at the same joint press conference Amb. Swan pointed out that the UN was at hand to continue its projects hence reiterated its stance on continued support on social development affairs.

Ambassador Swan lastly hailed Somaliland thanking the government for procedurally being committed to the partnership.

The President was flanked at the meeting by the VP H.E. Abdirahman Abdillahi Ismael and the foreign minister.

Below is the statement read by Amb. Swan.

Good morning and Happy New Year to all of you.

I thank President Musa Bihi Abdi, his team, and the people of Somaliland for their warm welcome.

I last visited Hargeisa six months ago. I intend to continue to visit regularly for discussions with senior officials as well as non-governmental actors on developments in Somaliland.   The United Nations maintains a full-time office in Hargeisa and implements a wide range of programmes to benefit the people of Somaliland.

During this visit, I was honoured to meet with President Bihi and members of his cabinet, civil society representatives, political party leaders, and international partners working in Somaliland.  I also visited a disability skills project and a wildlife rescue project.

The United Nations welcomes initiatives aimed at building mutual confidence and fostering dialogue between Hargeisa and Mogadishu.  We believe there are many areas in which greater cooperation could improve security, promote economic growth, and improve the lives of the people.

We encourage rapid progress to complete all necessary steps for Somaliland to hold parliamentary elections in 2020. We welcome the inter-party dialogue and urge implementation of the recent agreements that would enable preparations for elections to be held in 2020.  We call on Somaliland authorities to ensure respect for freedom of speech and assembly, as well as the ability of political parties to organise and function. Such political space is essential for a credible process.

We have noted positively recent efforts to address longstanding disputes in Sool and Sanaag — including the aftermath of the 2018 Tukaraq fighting — through dialogue and constructive approaches to ease tensions and reduce the risk of further conflict.  We urge that these efforts be maintained and reinforced.

We are committed to continuing United Nations engagement with Somaliland and our many programmes in support of its people.  With 16 United Nations offices, agencies, funds, and programmes active in Somaliland, our support covers a wide range of governance, security, development, and humanitarian programmes.  As examples, the UN’s work includes support to primary schools, equipping teachers with the skills and materials to provide a sound basic education. We provide assistance to internally-displaced people and refugees in Somaliland, fleeing conflict elsewhere or forced to move by drought.  We support the rule of law, policing and the justice system. The UN’s work is diverse, but the common thread is that it aims to make a practical and positive difference to the people and public services of Somaliland.

Again, I thank our hosts for the kind reception.  I look forward to continuing regular visits to Hargeisa to maintain our communication and collaboration and to follow up on the important issues we have discussed this week.