Over two hundred Kilos were burnt in Hargeisa and the cars transporting them impounded by the government of Somaliland. The exercise was overseen by the National Police Commissioner, Brigadier General Mohamed Saqadhi Dubad as well as the vice minister of the office of interior, the regional governor, and the Director General of the office of the president. Members of the National Preparedness Committee for Covid-19 imposed orders and the ban was enforced also witnessed the ban of the contraband goods. In Lasanodof Sool region, another consignment on Toyota Land Cruiser was caught and its cargo put to torch in a pubic square, to the applause of crowds watching the bonfire made over the coveted expensive habit. The operation which netted the captured goods was jointly undertaken by the regional police and the army units according to Colonel Mohamed Suleiman Goni, the regional police commissioner. The event was also attended by both regional and district level officials. The popular but costly drug which took a heavy toll on Somaliland’s economy as well as the the health of consumers largely comes from the neighboring Ethiopia to a tune of about 200 million US dollars a year, according to Somaliland’s ministry of finance statistics. The ban of Khat went into effect on Sunday, 26th April 2020 and will last for a period of 25 days. 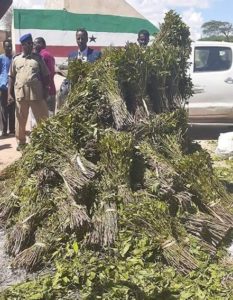