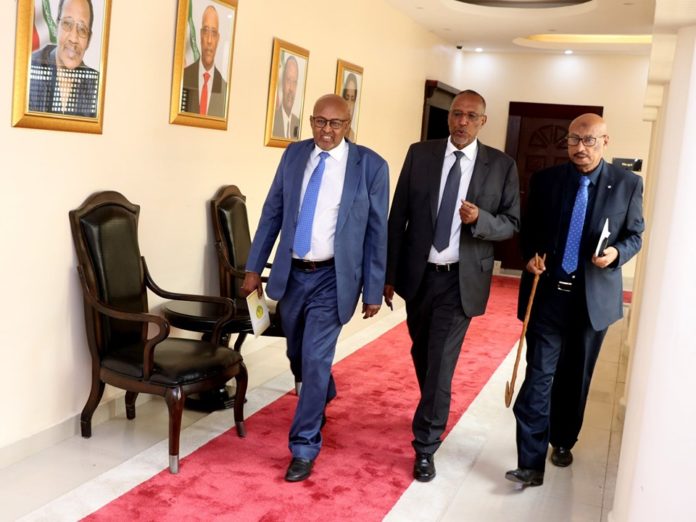 The House of Representatives refused to approve a deal reached by the three political parties of Somaliland to resolve a stalemate caused by a controversy surrounding the composition of the members of the electoral body.

The parties agreed to amend the electoral law to increase the number of members of the electoral commission from 7 to 9. The increase was demanded by the main opposition party.

After the international community facilitated dialogue, the parties finally agreed so.

Members of the House submitted a bipartisan motion to the House of Representatives to make the agreement legally binding.

The legal advisor of the House read a statement before today’s session of the House and said the manner the motion was presented was inconsistent with the bylaws of the House.

He argued that a draft electoral law is before the House of Representatives, and for that reason, a motion on that subject cannot be submitted at all.

After the lawyer read his advice, the speaker of the House of Representatives, Bashe Mohamed Farah, closed today’s session and declared 45 days of recess.

The opposition parties accused the government of breaching the agreement and pushing the Parliament’s decision.

“Our attempt to get a solution to election failed. The Ruling party undermined it,” Ahmed Abdi Abyan, the vice-presidential contender of UCID said.

“The ruling party has a majority in the House and has worked to get this outcome,” he added.

The Speaker of the House of Representatives is a member of the ruling party.

Abdikadir Jirde, a senior leader of Waddani, said the government will be responsible for the consequence of this decision.

The 2nd Deputy Chairperson of Kulmiye, Ahmed Abdi Dheere, said his party “welcomes” the decision. He added that the agreement was to refer the matter to the Parliament. “It was the decision of the parliament to reject or accept. It is not our fault,” he said.

Anyway, we should work together to hold an election, he added.