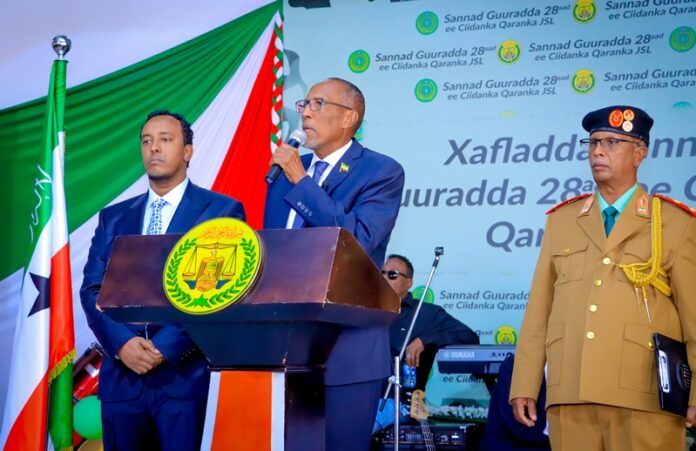 The commander-in-chief of Somaliland Armed Forces H.E Musa Bihi  Abdi has celebrated with the military  28 years of service to the nation. This auspicious occasion is held annually and marks the foundation of Somaliland military. It is celebrated on 2nd of February.

Somaliland President also welcomed diplomats from different countries present at the event. He equivocally stated that Somaliland is at peace with her neighbors and the world.

Addressing the men in uniform and invited guests the president said “It is my pleasure to welcome you all to this important milestone of our country. I’m congratulating all members of the armed forces across all ranks.”

The head of state commended Somaliland Army for zealously protection of the country borders and securities of neighboring countries, hence avoidance of threats to the greater Horn of Africa region.

He added, “You have also made sure that enemies of world development don’t get sanctuary within our borders or cross over to our neighbor countries.”

Commander-in-chief of Somaliland Armed Forces emphasized the necessity of the disciplined forces.

He stated that they have two significant  priorities the first is to protect the country’s borders from incursions by enemies or excursions into neighboring nations, and the second is to make sure Somaliland citizens sleep in peace, guarding their properties and lives from threats real or perceived.

President Bihi went on to say that Somaliland Army can accomplish the two aspects of these priorities, by respecting and acknowledging  principles set by the democratically elected government of the people.

“The Somaliland armed forces will have to take orders from the elected government officials who have been mandated by the nation’s citizens.” President Bihi reiterated.

The president elaborated the working of the government from the grassroots. He urged the military to adhere to Somaliland constitution.

“The men and women in uniform have to obey the orders of the executive, the implementing government organ.” The head of state emphasized.

The president revealed that the three national political parties also have to select candidates who have knowledge and expertise to run for high offices.

He advised Somaliland citizens to elect people of substance to represent them in government or else they will regret if they elected leaders with questionable characters who lack the ability to implement tangible development programs.