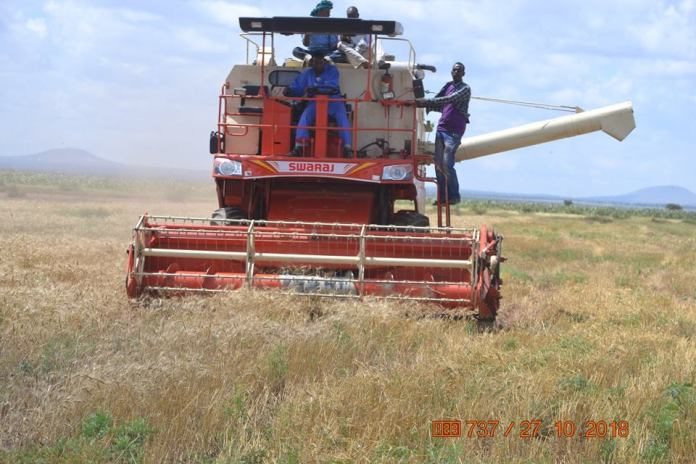 The first harvest of cereals from an agricultural scheme aimed at boosting production and ensuring food security in Somaliland is finding its way into newly constructed grain silos.

Somaliland, which remains perennially food insecure, unveiled the 767-hectare schemes to grow a variety of crops such as wheat, millet, maize, beans and sesame several months ago.

The seasonal emergency livelihood project which comprises three divisions is carried out in Tog-Wajale, Beir and Hahi localities.

It follows on from the recent severe drought, in which thousands were displaced and many lost their livelihoods.

In March, the Somaliland ministry of agriculture established the National Cereals and Produce Board and built silos to store food harvested from the agricultural schemes.

Mowlid Hassan Abdi, the head of the project, told Radio Ergo that the farming project funded by Somaliland government in collaboration with development partners was set at a cost of $300,000.

The cereals from the first harvest are being stored in the silos to strengthen community resilience in times of crisis.
“We made our first harvest two weeks ago. We harvested six tonnes of millet and wheat. The project is meant to deal with the droughts and food shortages caused by climate change,”Mowlidsaid.

The project targets feeding residents of three regions: Marodijeh, Togdher and Awdal. Mohamed Dahir, an officer from the agriculture ministry, said the government would release this food from the silos during periods of drought to meet food shortage. Most of the food will be distributed to pastoralists. The stems from the grain crops will be used as livestock fodder.

Mohamed Dahir, an agriculturalist, said this would help fill the food gap in Somaliland and would enable the government to better support IDPs, nomads and those affected by recurrent drought.

“This will reduce displacement of people because if the government distributes food to the affected area nobody will flee from his home,” he told Radio Ergo.

Adan Igal, who lost his livestock to the drought in 2016, welcomed the initiatives by the Somaliland government saying the project will help many people to alternative food sources.

“I was displaced by drought. We had been surviving on little food distributed by aid agencies. I would not have fled if there had been such project earlier,” said Adan, who now lives in an IDP camp in Gar-adag village in Sanag region.