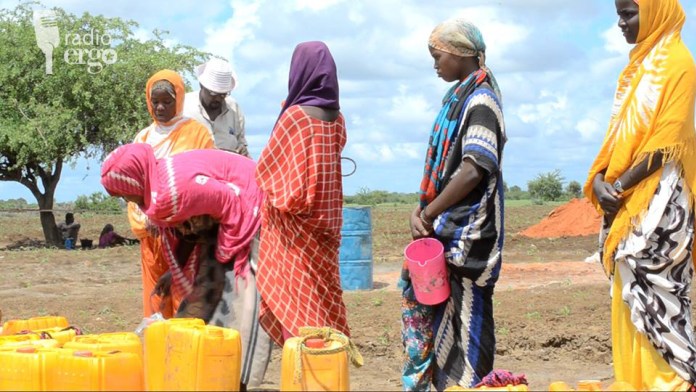 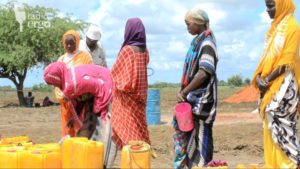 Villagers in Geed la-rifay, 40 km from Badhan in northern Sanaag region, are facing a severe water shortage, with water being sold at a record high price of 200,000 shillings ($6.6) a barrel.

The water catchments that refilled during the Gu rains have dried out. Local residents say the long drought meant the soil did not retain the water.

Around 30 pastoralist families have moved away this month to the Almadow mountains searching for water.

Ruun Mohamed Omar’s family and five others in the village decided to come together and share the cost of water trucked in by businessmen.

As they live on high ground that vehicles cannot easily reach, the tanker delivers the water they buy to a plastic-lined pool some distance away. Ruun and the other women walk for half a day to collect the water in jerry cans and bring it home by donkey cart.

Ruun, a mother of 10, holds on to pastoralism as a lifeline for her family. She keeps 100 goats in the rural area and sometimes trades goats for the water, or buys it on credit.

Some of the local elders told Radio Ergo that the village hosts around 500 destitute drought-hit families who migrated to the area. They cannot afford to buy water and so are desperate.

Abdulahi Abdi Jama, the village chief, said only one water tanker is currently serving the area. There were two others that stopped coming because the drivers were not being paid despite their arduous journeys. The locals are often slow to pay their bills.

Abdullahi said they use the water very sparingly, which means they cook and clean less often. They used to rely on water for free. Having this additional cost is a burden to the villagers, who now depend heavily on their relatives for help.  He said they eat only twice a day, and occasionally take a bath.

Bile Awad Ali, the tanker driver, said he fills up from wells and dams in another part of the region, about 30 km away.  It takes him at least seven hours to deliver to Geed la-rifay due to the state of the roads and rough terrain.

Mohamed Awil, an elder, works in Badhan and sends money back to his family in the village.  He told Radio Ergo that his family is spending $65 on just 10 barrels of water every month. They have not experienced such hardship in a long time, he said.