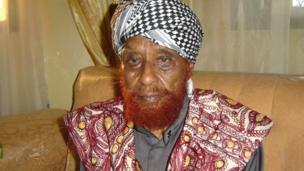 Hargeisa–Hon. Haji Abdi Karim Husein Yusuf  aka Abdi Warabe, the longest serving legislator in the house of elders in Somaliland, died at a hospital in Hargeisa today.

The late Abdi Warabe died at the age of 122.

The demise of the late Haji Abdi became a tribal leader 12 years before Queen Elizabeth II assumed the throne and he has clear memories of the day she was crowned.

He was among the rare individuals who sacrificed for Somaliland’s rebuilding after it went through turbulent period in the past ever since it seceded from Somalia in 1991.

The Head of State Musa Bihi has sent his sincere condolences over the death of pacifist.

The late Abdi Warabe was hospitalized at Hargeisa International hospital where he peacefully passed away.

On behalf of Somalilandstandard staffers across the state, we send our heartfelt condolences to the family member, relatives and somaliland populace for the passing away of the elder.