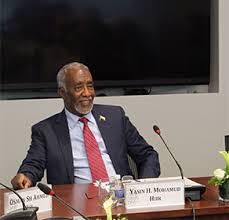 FM from Somaliland Honorable Yasin Mohamud Hir alias Faraton tendered his resignation to President Bihi. The decision to submit the resignation letter to president Bihi by the FM is the second time running. The FM from Somaliland has cited in the letter addressed to Bihi that he is stepping down on health grounds. He further made clear in the letter that he cannot discharge the national duty that the president has bestowed upon him. The FM while in the UK was advised to give up serving the political life by his doctor. President Bihi is reported to have rejected the resignation made by the FM and requested to keep his ministerial portfolio. The FM recently skipped meetings that the international delegations from the EU held discussions with Somaliland officials. The ministers appointed by president Bihi come under fire from day one as he was supposed to name figures that would lead the country to prosperity. There are reports that other government officials in Bihi administration who are planning to tender resignations. A lot of criticism against the president is that he is using a go alone policy and ruling the country with iron fist.