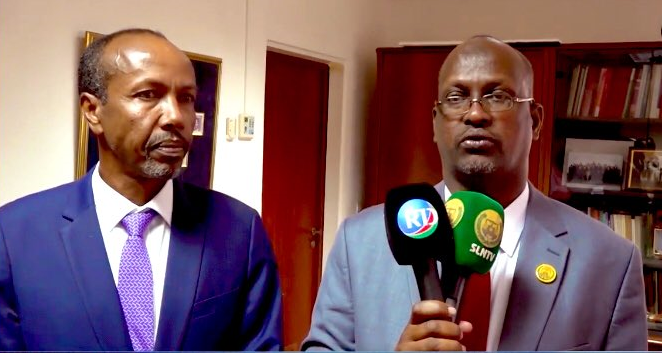 The two sides discussed ways to boost bilateral relations and capacity building on the side of knowledge to the Somaliland Central Bank staff.

The Governor of the Central Bank of Somaliland Eng Abdillahi who spoke to the media after the meeting said that they had a meeting with Djiboutian central bank officials on how to improve co-operation between the two banks, and exchange knowledge, regulation and experience.

“We are working together to improve the financial situation of the people of the two countries”, he said.

The relationship between Somaliland and Djibouti is one of brotherhood, citizenship and bilateral relations.

The Governor of the Central Bank of Djibouti Hon Ahmed Osman, on his side, stated that he welcomes the delegation led by his Somaliland counterpart. Adding the central banks of the world usually cooperate and we are two countries who share brotherhood, trade and people. “It is vital that the two banks cooperate with each other to develop their economies and regulations, and to facilitate the business people of the two countries for their work.

The meeting between the two governors comes a week after the Somaliland Central Bank of Governor returned from a visit to Ethiopia and met with his central bank counterpart.

Eng Abdillahi, who has recently been working to improve the work of the CB, is putting concerted efforts towards fulfilling better similar engagements with countries further afield.