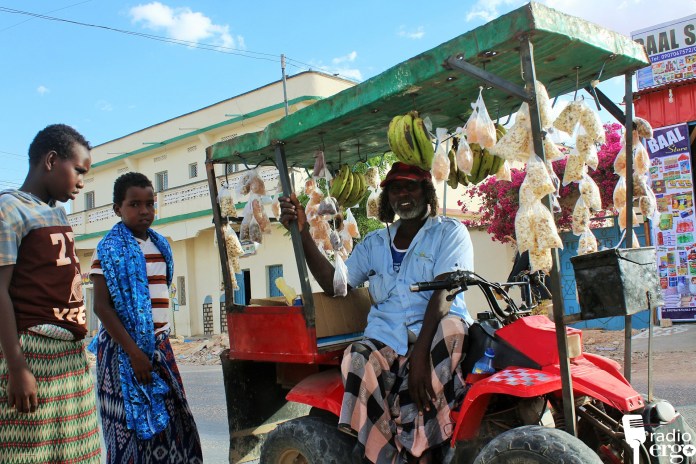 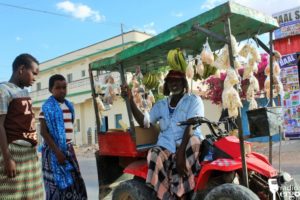 Jama Aidid Abdi, 45, has become a well-known figure driving around Lasanod town in northern Somalia’s Sool in his customised quad bike that serves as both a wheelchair and a mobile food stall.

Jama, who has been paralysed since falling from a tree as a six-year-old boy, was given the diesel-run bike by a local businessman nine months ago. He adapted it with a shelf at the back and a roof to hang his sale goods – fruit and snacks such as bananas, mangos, raisins, and other small items like frankincense.

“Life used to be so hard,” Jama told Radio Ergo. “As I was unemployed I used to depend on the small amounts of about $100 I received from relatives and that are barely enough. My business is taking off now though and I earn $15 in a day and can afford food and other needs for my family.”

Living with disability in Somalia is extremely challenging. There are no special facilities to ease movement and mobility and most disabled people lack access to education and jobs.

Jama invested $200 borrowed from a relative to start his mobile business. He is now able to pay the $25 rent for his house and the $7 monthly school fees for four of his seven children.

He is proud to earn an independent living, leaving his house early in the morning to drive round town hawking until noon, then selling in the market place in the afternoon.

His customers often comment on his determination and innovation and always ask him how he managed to set up a shop inside his wheelchair.

Sheikh Mubarak Dool, who heads Sool’s disabled persons association, told Radio Ergo that a survey conducted in 2016 showed there were 860 people living with disabilities in Lasanod. These included 120 women.  Only five people the association knows among their members are earning a living, including Jama and four people working as teachers.  Eleven people with disabilities are studying in local universities.

Mubarak believes Jama is a motivation to others living with disability.

The mayor of Lasanod, Abdiaziz Hussein Tarwaale, told Radio Ergo they are aware that the city lacks facilities to support the disabled. He said they are planning to introduce services for the disabled in the near future.