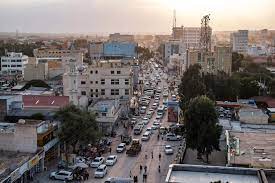 Somaliland is asking Canada for international recognition and aid, saying it’s important for Western countries to support a functioning democracy that’s resisting China’s influence in the Horn of Africa.

The self-declared state, which split from Somalia 30 years ago, sent its Foreign Minister, Essa Kayd, to Washington, London and Ottawa recently as part of a campaign to refashion its external relationships. A U.S. congressional staff delegation later visited Somaliland.

Mr. Kayd, 61, who also holds Canadian and U.S. citizenship, met with officials at Canada’s Department of Global Affairs in December. He’s asking countries to provide aid directly to Somaliland instead of giving it through Somalia. He also hopes for recognition as a separate country, a measure that Canada would not likely take unless it was part of a concerted effort by Western allies.

Somaliland, which broke away from Somalia in 1991 but has not gained widespread international recognition for its independence, has been largely peaceful while the rest of Somalia has suffered three decades of civil war. In long-delayed parliamentary and local elections last year, opposition parties scored big wins.

“We’re asking Canada to compare and contrast,” Mr. Kayd said. “For the last 30 years we’ve shown the world we have our own territory, our own military,” he said.

The International Crisis Group think tank last year called the elections a milestone on Somaliland’s road to democratization. “The results are a refreshing piece of good news in the volatile Horn of Africa, where violence often erupts around big votes and entrenched interests make opposition victories rare,” the group said in a report on the elections.

Mr. Kayd alleges that Somaliland only receives a fraction of the aid provided to Somalia from international donors. “Ninety-eight per cent of it is going to Somalia and perhaps 2 per cent is reaching Somaliland,” he said, accusing other players such as militant Islamist group al-Shabaab of taking a share of the aid.

He said Somalia last summer provided Somaliland with COVID-19 vaccines only two days before their expiry date, leaving the shipment on the border between the two jurisdictions.

Canada gave $37-million in aid to Somalia in 2019-20, the most recent full year for which figures are available. Global Affairs spokeswoman Geneviève Tremblay said Canada does not send aid directly to Somalia but instead works through international agencies and non-government organizations such as the United Nations and the International Red Cross. She said Canada supports international assistance projects “that have activities throughout the different regions of Somalia, including Somaliland.”

Somaliland is caught up in the competition for superpower influence among states in the Horn of Africa, which lies on the western side of the strategically important Red Sea. About 10 per cent of global trade passes through the Red Sea and, in combination with the Suez Canal, offers both commercial and military shipping operators the shortest route between the Mediterranean and the Indian Ocean.

International companies are betting on Somaliland, which has 850 kilometres of coastline on the Gulf of Aden adjacent to the Red Sea. Dubai-based logistics company DP World is investing US$440-million to build a new container terminal at Berbera, Somaliland’s main sea port.

China’s influence in the Horn of Africa has been growing. Beijing recently built its first overseas military base in Djibouti, the capital of the Republic of Djibouti that lies about 21 kilometres from the border with Somaliland. China has been making extensive investments in Djibouti and The Washington Post reports that Beijing now holds more than 70 per cent of the African country’s gross domestic product in debt.

The Chinese base in Djibouti is only a few kilometres from Camp Lemonnier, the only permanent U.S. military base in Africa, which is also in Djibouti.

Somaliland is one of few jurisdictions in Africa to resist China’s offer of loans and infrastructure in Beijing’s Belt and Road Initiative to establish new trade routes. In July, 2020, Somaliland’s government signed an agreement to establish relations with Taiwan, a development that ran counter to Beijing’s effort to diplomatically isolate the self-governing island.

Taiwan also stepped in with COVID-19 vaccines for Somaliland after the expired batch from Somalia had to be discarded, Mr. Kayd said.

He said China represents a threat to the region. “If we were to sign an agreement and accept China as our ally, it means that the freedom of the waterways of that region could be compromised. That’s why we have the Americans paying more attention.”

Somalia, which has had only limited central government since 1991, is trying to reconstruct itself with the help of the United Nations. Al-Shabaab aims to topple the Somali government and impose a strict version of Islamic law. It often carries out bomb attacks on government targets but also on civilians.

Neither the Chinese embassy in Ottawa nor representatives of Somalia’s government could be reached for comment Monday.

With a report from Reuters