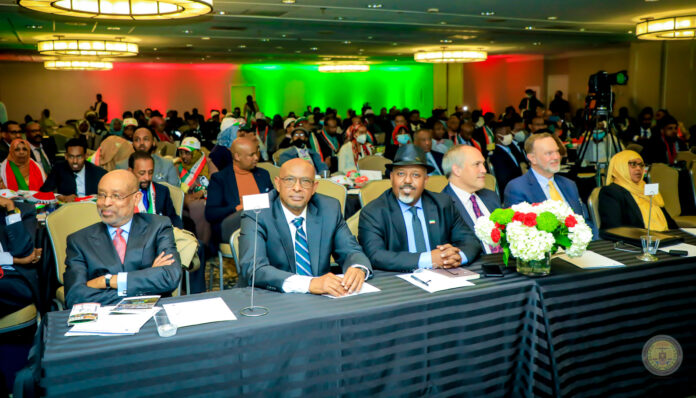 “I urge all Somalilanders in diaspora to be ambassadors and representatives of Somaliland,” His Excellency Dr. Issa Keyd Minister of Foreign Affairs.

Dr. Essa stated, “I want to share with you some  details, the preparation of these talks have been going for years, thanks to Somaliland ambassador in US, and others who assisted.

“We met US government both executive and legislatures beckoning a new dawn in our aspirations”.

Prof Ahmed I. Samater, who spoke at the event commended on the work accomplished by President HE Muse Bihi and his delegation, and urged community to step up their efforts.

“We want to support the representative office of the Republic of Somaliland in Washington”,said Professor Samater.

Former US Assistant Secretary of State for Africa, US Ambassador to Guinea and Ethiopia, Adjunct Professor for Honors College at Texas Tech University, who spoke at the event advised Somaliland community in US to engage their host nation, to further their country’s aspirations and its quest and gain support.

“Many and many Americans do not know Somaliland and the Somaliland community in the United States and you should be able to engage with them.” Ambassador Tibor Nagy

A panel discussion was held in Washington DC with the participation of international scholars and members of the President’s delegation accompanied by Prof. Samatar and the American Community to Analyze Somaliland Opportunities.

The delegation of the President of Somaliland is on the seventh day of their working visit held an important meeting with the Somaliland community in the United States to discuss the opportunities of the Republic of Somaliland during the visit and his time and members of the cabinet along with foreign scholars supporting the cause of Somaliland’s independence as well as Somaliland scholars including Prof Ahmed Ismail Samatar attended.

The event slated for the day was scheduled to go on for ten hours or so was still in process as we went to press last night.

Five different topics under discussions in different panels were as follows;