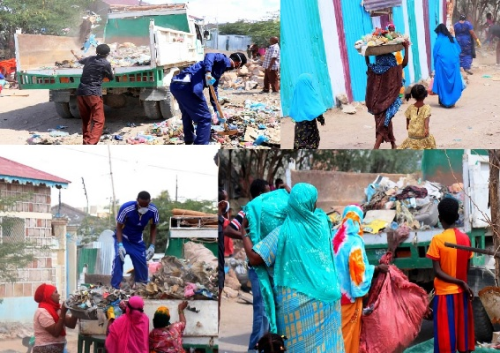 A lawyer by the name of Hon. Barkhad Jama Batun mobilized residents in Dami village, one of slams in Hargeisa, Somaliland capital to take part in a cleaning up campaign.

The village lacks the basic social services including the likes of superb roads, stadiums, police stations and public schools.

TV coverage was aired on the impoverished slams that lacked the basic needs of life where all that attention fell into the deaf ears of Somaliland government.

Residents who are among the destitute members of Hargeisa community turned out in hundreds which was led by Hon. Barkhad Batun led them in the hygiene exercise and was instrumental in removing garbage and trash from the village.

The photos of Barkhad, a lawyer by profession was pictured while removing trash with his shovel and the pictures were spread like wild fire in Social Media.

The residents were frenzy as they were upbeat about the hygiene exercise spearheaded by Hon. Barkhad, a member of Wadani opposition party in Somaliland.

He blamed the lack of progress in the village by Musa Bihi’s government and gave up the patience to keep waiting for the government and rather initiated self help project.

Most of the communities in this village are marginalized due to their clan-ship and are subjected to segregation.