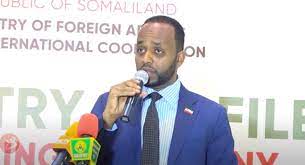 The government of Somaliland has in a strong worded response condemned Somalia undemocratic government for constantly sabotage of her International recognition campaign. This follows a bill tabled in the British Parliament to recognise Somaliland. The motion brought by an ardent supporter of Somaliland, Hon. Gavin Williamson of the Conservative Party.

Also speaking to journalists was a vocal opposition member of parliament Mr.Barkhaad Batuun who responded to Somalia government.

Hon.Barkhaad urged the government of Somalia to concentrate on bringing peace to their country instead of wasting time on Somaliland. He went on to say that the people of Somalia are suffering while their leaders are mere propagating propaganda about Somaliland.